Why I Ordered Imo Accounts To Be Frozen - Imo Governor-elect, Uzodinma


Senator Hope Uzodinma has revealed why he immediately ordered the freezing of Imo state accounts. 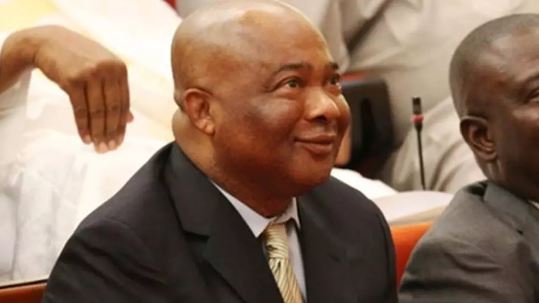 Hope Uzodinma
Governor-elect of Imo State, Senator Hope Uzodinma, has stated the reason why he ordered the freezing of the accounts of the state government.
According to TheNation, Uzodinma said he wanted to exercise the right given to him by the Supreme Court judgement declaring him as the duly elected governor of the state on Tuesday.
In a letter dated January 14, 2020, Uzodinma ordered all financial institutions where the state funds are maintained not to honour any draft till further notice.
The letter addressed to the regional directors and managers of all the financial institutions in Imo State and signed by Cosmos Iwu, director-general of Senator Hope Uzodinma Campaign Organisation, on behalf of the governor-elect, ordered the financial institutions to “post no debit” on all the accounts.
The letter which was titled, “Order of post no debit on all accounts of Imo State government effective 14, January 2020” stated that the order was sequel to the apex court judgment which declared Uzodinma the new governor of the state.
The three-paragraph letter, which was sighted by The Nation in Owerri on Wednesday, read, “Following the Supreme Court judgment of 14, January 2020, I am directed by his excellency, Senator Hope Uzodinma, to take this as your authority/instruction to place a post no debit order on all accounts of the Imo state government maintained in your various institutions.
“You are by this letter directed to comply and await further instructions from the office of his excellency, the executive governor of Imo state. Thanks for your cooperation”
Top Stories