Seyi Makinde: The Actions Of The Audio Governor


In some quarters, he is believed to be one of the most empathetic governors in Nigeria who is responsive to the needs of his people. 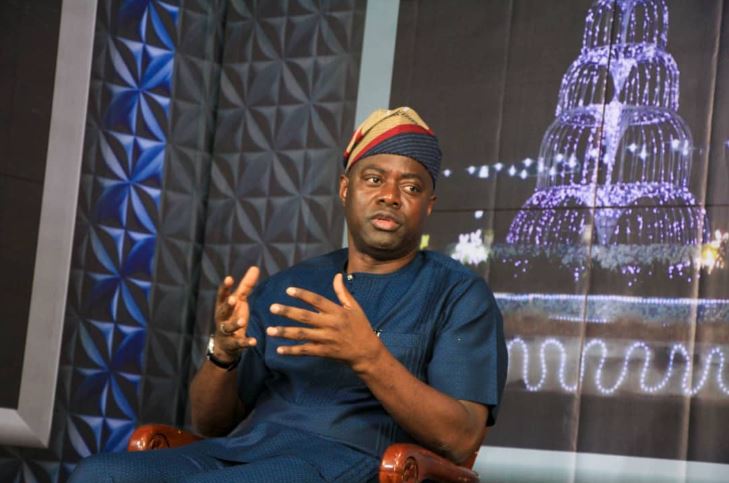 Anyone who uses Social Media in Nigeria today, and who is remotely interested in the politics of the country, will be keenly aware of the searchlight beamed on Governor Seyi Makinde (GSM) and his activities in Oyo State in the last seven months.

It is the consensus that he is doing well as governor. In some quarters, he is believed to be one of the most empathetic governors in Nigeria who is responsive to the needs of his people. Some have even gone as far as naming him as one of the top four contenders for the people’s choice for Presidency in 2023.

On his part, GSM has not said anything about running for the country’s top position. In fact, he has not even pipped about a second term in office. However, his seeming nonchalance, near single-minded concentration on governance issues and rising profile has only driven the opposition, led by the leadership of the defeated All Progressives Congress (APC) against the wall. In recent times they have launched an “informal” attack on GSM, throwing dirt at him to see what will stick. They have employed the use of the label ‘audio governor’ as they compare him to any governor that as much as hints at an achievement real or imagined.

Let us take as an instance, his visit to the market after the Akesan Market inferno. Some commentators have said that it was a populist move for him to appear so despondent as the Iyaoloja cried on his shoulders. But anyone who has followed GSM from when he first expressed interest in politics will attest to his kindheartedness. In 2015, one source described him as “kind and philanthropic, building schools, health centres and borehole water for communities, as well as providing transformers and many times cash gifts to needy widows, families and indigents students.”

The angst of the opposition that leads to such labels as #AudioGovernor is simply laughable. A quick search of that phrase on Social Media will show that the instances they have used it, and the comments they have used to support it are either half-truths, complete fabrications or simply mischief. Any random person in Oyo State will be able to name at least one way that GSM has touched their life. But let us humour the naysayers and do a quick assessment of their claims.

They say he should have provided water to fight the Akesan fire instead of going to “shed tears” with market women. By reducing the issue to water, they try to make a case for the incompetence of GSM’s administration.

But this is a clear case of mischief. The issue with the Fire Station beside Akesan Market was not that they did not have water. If our friends in the opposition were as interested in the progress of Oyo State as they were in spreading malicious lies, they would have found out that the fire truck had developed a mechanical fault with its gear. They would also have hidden their heads in shame and cried in self-pity because the last time a fire truck was bought in Oyo State was under the tenure of Governor Alao Akala.

The Constituted Authority under Governor Abiola Ajimobi did not even bother. Interestingly, even though GSM could have pointed out this well-established fact, he chose rather to keep another campaign promise: never to pass the buck. In his words, “I take responsibility for this failing, I will make things right.” A bid for fire trucks was opened the very next day and due process for purchase is being followed. Even before this incident, GSM had already stated in his 2020 budget speech that fire trucks would be purchased under the budget.

They say he has no listable achievements. They talk about how other state Governors can list their achievements in clear terms.
Where does one start to debunk this fabrication? Even after just 100 days in office, in fact, from his first day in office, GSM had already started ticking boxes in the achievement list. Is it the declaration of free education? Or the opening of the Secretariat bridge for use by the public? His wins may not make sense to the opposition; people outside Oyo State can make snide remarks about his wins not being all that compared to “developed countries”.
But GSM only needs to make people of Oyo State happy. Like he did when he increased funding for education to over 20% of the entire budget for the 2020 fiscal year. Or he has done by massively investing in infrastructure rehabilitating about 80% of all roads in Ibadan.
Let’s take a roll call of just seven of the several ongoing road projects in Oyo State:
Expansion of Oke Adu Junction- Agodi Gate – Idi Ape Interchange Road, Ibadan
Expansion of Oke Adu – Beere – Mapo – Molete Project
Reconstruction/Rehabilitation of Beere – Orita Aperin -Akanran – Gbedu – Dagbolu Road Project
Expansion of Oritamerin Oopo-Inalende- Mokola Project
Expansion of Beere – Alekuso – Oritamerin- Agbeni – Ogunpa -Ebanon Street – Dugbe Road Project
Reconstruction of Ibadan (Eleyele Junction)- Akufo Junction – Ido Eruwa Road – Akufo Junction – Ido – Eruwa
Dualization of Saki Township along Oke – Ogun Poly – Ilesha Baruba Road

How do you conscientiously celebrate Borno State Governor donating 70 vans to the army and police but refuse to acknowledge that GSM commissioned 100 vehicles, purpose-built with high-tech communications equipment for security in his state? You have to be high on very cheap locally made gin to refer to the purchase of fire-fighters uniform, building of pavements or replacement of conveyor belt in a heavy duty machine by the Kwara State Government as “visible” achievements while referring to the Light Up Oyo project which saw the street lights at the Ibadan toll gate come on for the first time in twenty years as “audio”!

On education, they said he refused to pay WAEC fees for SS3 students and only distributed 40 leaves exercise books to select students while tying promotion of teachers to performance of students in external exams. They also claim he promised to reduce LAUTECH fees.
Half-truths and outright lies!

At no time did GSM promise to reduce LAUTECH fees. In fact, as LAUTECH is co-owned with Osun State, GSM cannot unilaterally reduce fees. The moment this “Fake News” appeared on social media, his aides were quick to debunk it. The opposition knows this but they choose to keep repeating the lie.
Also, he never at any time promised his administration was going to pay WAEC fees. While he is interested in students getting an education, he also wants parents/guardians and indeed the community to invest in their wards. Following the model used by Chief Bola Ige, the Oyo State Government offers free qualitative education without taking on the burden of paying external examination fees.

Yes, qualitative education because contrary to what is peddled on social media, the Oyo State Government has since November 2019, approved the retraining of all teachers in Oyo State. They have also invested massively in their SS3 students, giving them extra-mural lessons, and providing them a compendium of past questions. Approval was also given for the purchase of six sixty leaves exercise books for each pupil/student in Oyo State public school. If pupils/students in any areas have not benefited from this the right thing to do would be to reach out to the authorities through the Ministry of Education’s Helplines or the @FeedbackOYSG Social Media accounts to complain.

Also, state-owned schools across Oyo State are being renovated in tranches of 100 at a time, in order to provide a conducive environment for learning. Desks are also being distributed to these schools. This is in addition to model schools being built and/or completed to absorb the growing number of students who have returned to public schools after GSM declared free public education.

And what about the payment of N500,000 each as bursary for 120 Oyo State indigenes in the Nigerian Law School, is that not an audio promise, they ask?
How completely vacuous does anyone need to be to, on the one hand, congratulate one governor for giving 179 persons N100,000 each as law school bursary while, on the other hand, refusing to acknowledge another who gave over one hundred persons half a million Naira each? Indeed, 120 students that belong to the 2019/2020 (backlog) set of the Nigerian Law School were paid the bursary. They acknowledged publicly through their representative, Mr. Olaniyi Adisa Ogunlade, that they were paid.

The only issue that came up later was that the 2018/2019 set had somehow been delayed and were also in school during that time and so they also wanted to benefit from the largesse. In his usual quarterly media chat, GSM openly apologised to them for the mix-up and promised that the Scholarship and Bursary Board would handle the disbursements in future to avoid such mix-ups. In which universe does the fact that the 2018/2019 set were not paid mean that the 2019/2020 set were also not paid? This is purely a case of selective amnesia resulting from repeated exposure to the opposition Kool Aid!

The fact remains that the opposition is simply afraid of GSM. If the noise is this loud when “he has not done anything” what will then happen when the seeds that are germinating flourish and bear fruit? I wonder what they will do when his agricultural reforms take effect. When the Eruwa and Akufo Farm Estate Public Private Development Partnership (PPDP) pilot schemes are established and become functional? Will they still have words when the Moniya-Iseyin Road is completed at the end of 2020? Will there still be tears left to cry when the proposed Health Intervention Programme takes medical services to the nooks and crannies of Oyo State? Or when the IGR of Oyo State rises to Twenty Billion Naira in 2023 without any increase in taxes?

An African proverb aptly says, “the man that kills with the knife is always afraid when he sees someone approaching him with a knife.” So, we understand your fears, Dear APC. But the GSM we have come to know is not anything like what you are projecting. He does good because he is good and he will not stop doing good because you choose not to be good. The people of Oyo State stood by him and defended his mandate in 2019. Even with the “little” he has done in these past seven months, I can say that they will stand by him again, should he choose to run in 2023. And this is not me flying a kite, this is the voice of the people.