Minister of Women Affairs and Social Development, Pauline Tallen has been accused of appointing her daughter as her aide. 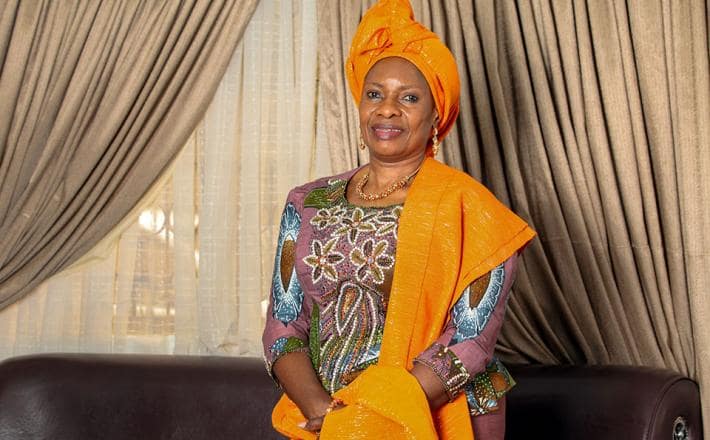 Pauline Tallen, Nigeria's Minister of Women Affairs and Social Development, has reportedly appointed one of her daughters, Violet Osunde, as a Special Assistant in her office.

Premium Times reports that Mrs Osunde who was a senior executive assistant with the National Databank Management Department of the National Pension Commission, was offered her appointment letter in November last year.

According to the report, on November 14th 2019, the Permanent Secretary of the Ministry of Women Affairs, Ifeoma Anagbogu, through the Director, Planning, Research and Statistics Department, reportedly addressed a letter to Osunde, informing her of appointment to serve as a special assistant to the Minister. The letter with reference FMWASD/PS/128/VOL.II/302 reads in part

“I am directed to inform you that a request has been made to the Secretary to the Government of the Federation for your release to the Federal Ministry of Women Affairs to serve the Honourable Minister’s special assistant. Other correspondences on the subject have been forwarded to appropriate offices.

“As you are aware of Honourable Minister’s itinerary for the coming week, you are expected to travel with her and accompany her to various sessions, therefore you are directed to formally request for release from your organisation to serve as special assistant to the Honourable Minister, Federal Ministry of Women Affairs.”

“I wish to inform management that I have been appointed as the special assistant to the honourable minister of women affairs. Consequently, I wish to humbly request to be granted leave of absence for a period of four years effective December 1, 2019, to December 1, 2023, to enable me carry out my duties as required under the ministry of women affairs.

Accordingly, if approved, to ensure all tasks assigned are completed as expected, I will make certain that all assignments are duly concluded and handed over appropriately before my departure.”

Following some reactions from some Nigerians who frowned at the development, the Minister who spoke through the Permanent Secretary in the ministry, Mrs Anagbogu, said there is nothing wrong in what she has done.

“As long as I do not pay from my salary, my hourable minister and even me, has the right to choose whoever will give us support and enable us to achieve our mandate. Even if it is that man on the street and I found out he is useful to me I can use him as my aide. I am being very factual and honest with you, what is the big deal in appointing one’s son or daughter as an aide?”Anagbogu said

When reached for for his reaction, the spokesperson of the Peoples Democratic Party, Kola Ologbodiyan said the Minister's action shows that the Buhari-led administration is morally bankrupt.

“Well, we have not confirmed that story but if it were so, it borders on moral bankruptcy, which is a system that has been established by this administration. President Buhari’s administration is about absurdities; they have no respect for morality and they are very divisive. They also don’t care about the feelings of Nigerians and that can only account for why a serving minister will use her daughter as a special assistant.” he said.