Workers at the Federal Institute of Industrial Research Oshodi have staged a protest, shutting out the management staff. 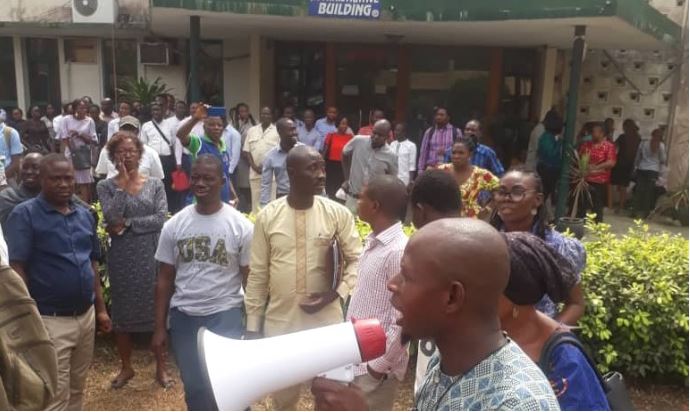 According to The PUNCH, the protest action at the Federal Institute of Industrial Research Oshodi, Lagos, over the controversial doctorate certificate of the acting Director-General, Chima Igwe, continued on Monday, with the workers shutting out all management staff of the institute.

With this development, the protest has reached day three.

The PUNCH learnt that the Governing Board, led by the chairman, Alhaji Ibrahim Gwarzo, had gone to Abuja to meet with the Minister of Science and Technology, Dr Ogbonnaya Onu.

The Chairman of the Senior Staff Association of Universities, Teaching Hospitals, Research Institutes and Associated Institutions, FIIRO branch, Togunde Mumeen, said the workers would not back down on their demand for the suspension of Igwe based on extant public service rules.

The acting DG for 18 years gave excuses why he could not produce his PhD certificate.

The PUNCH correspondent, who, however, investigated the matter, discovered that he had yet to complete the programme, which he started at the Universite d’Abomey Calavi, Benin Republic.

Workers said they were angry that the 57-year-old had been fraudulently promoted based on the claim, despite the stagnation of many of his seniors.

The matter is also a subject of an investigation by the Independent Corrupt Practices and other Related Offences Commission.

It was alleged that Igwe had the backing of the minister, Onu.