The governor of Kaduna state, el-Rufai has condemned the fresh attacks by gunmen in the state calling it inhumane. 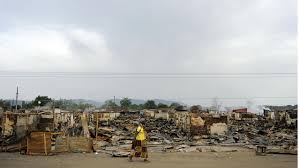 Governor Mallam Nasir El-Rufai of Kaduna State on Monday described as “inhuman and unfortunate” the bandits’ attack on Gora-Gan village in the Zango-Kataf Local Government Area of Southern Kaduna on Friday.

The attack claimed two lives while the injured were reportedly taken to hospital for treatment.

Some gunmen had invaded the village market square and opened fire on the youths, killing two of them on the spot.

The Kataf LG Chairman, Elias Manza, confirmed the incident to reporters, saying that the attackers rode on motorcycles to perpetuate the crime.

Meanwhile, the governor visited the scene of the incident on Monday where he had a meeting with stakeholders on how to ensure peace in the area.

The meeting was held at the ‘Operation Safe Haven Sector 7, Kafanchan, the Zango-Kataf LG secretariat.

The state Commissioner for Internal Security and Home Affairs, Mr Samuel Aruwan,  who represented the governor, said the government was sad over the renewed killings in the area.

He, however, appealed for calm, saying that government was committed to sustaining the peace and security of the area.

The governor also said the government would launch investigation into the latest attack in the area.

El-Rufai said, “The discussions in our meeting centre on security of the state.  We will continue to strategise and bring initiatives. As for the recent incident, we condemn what happened. Investigation is in progress. We are deeply committed to sustain the peace in the state.”

The District Head of Gora-Gan, Elias Usman Gora, called on the government to deploy more security to the area.

This was just as the monarch appealed to the authorities concern to reopen the police station in the area.

“Our youths should continue to live in peace and support the government in its efforts to bring permanent peace to our area,” he added.

The commissioner led the state government delegation to visit those injured during the crisis at the General Hospital, Zonkwa.