YWC insisted that it has drawn the battle line with the Federal Government on the creation of security outfit by South West Governors. 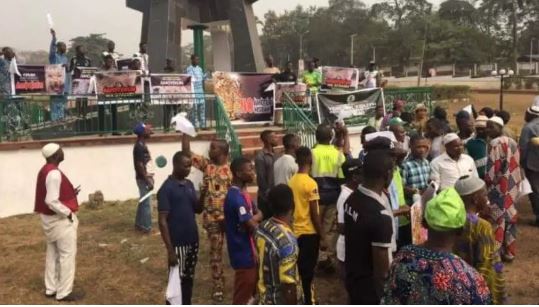 Members of the Yoruba Worldwide Congress

The Yoruba Worldwide Congress (YWC) has on Tuesday, declared that no amount of intimidation from Nigeria Police Force, an agency of the federal government of Nigeria can stop the existence of Western Nigeria Security Network also known as Amotekun.

DAILY POST gathered that some men in uniforms stopped the ‘Amotekun’ protesters at Gani Fawehinmi Park in Ojota, Lagos on Tuesday.

But, YWC while reacting, insisted that it has drawn the battle line with the Federal Government on the creation of security outfit by South West Governors.

The group said that no amount of Federal Government power can stop the outfit, maintaining that security of life’s and property of Yoruba’s is a must and paramount to the geo-political zone.

Oyo State Coordinator of YWC, Evangelist Kunle Adesokan while speaking with journalists during a protest in support of Amotekun in Ibadan, the Oyo state capital said there is no going back on the issue of Amotekun, adding that Yoruba people will not allow foreigners to come and kill their people unnecessary.

Apart from carrying the placards, the protesters also sang various solidarity songs to express their determination to support the Southwest Governors and ensure the security outfit works. Inscriptions on some of the placards read, “Yoruba Omo Oodua: Protect Yourself, Amotekun”, “On Amotekun we stand”, “We want to know who owns the Land. Amotekun”, No Amotekun, No Hisbah”, among others.

Adesokan, who spoke on behalf of the protesters, pointed out that Yorubas are tired of blood shielding because Nigeria is not mean for anybody nor a group of people, or a certain section, of the country.

“No amount of Police can stop us because people want to secure their life and they don’t owe anybody apology in doing this. We are here in our land and has the sense of belonging to accommodate everybody who come to southwest for trade and commerce, but we would not allow anybody to come here raping our wives, killing our farmers and destroying our farm land.

“On behalf of the Yoruba leader, Professor Banji Akintoye, and the Yoruba in general, we appreciate all the southwest governors, they should know that they are not alone in the struggle so there should be no retreat in their commitment towards the security idea. We are telling the governors that they were not alone, security is an environmental issue, so there is a need for us to secure our environment.

“Today is another day of history in our life time, this will serve as our stand for today’s appearance of the real Amotekun to the people of the Southwest. We are addressing our governors and we are giving all our governors in the southwest this solidarity support.

“We want to tell them that the entire Yoruba people are behind Amotekun and there is no going back. No matter the threat from wherever, Yoruba is not going back from the Amotekun plan. We will never allow foreigners to come on our lands to start killing us unnecessarily. We are tired of the blood-letting.

“Nigeria is for us and for us all. Not for certain section of people. We are here on our own land with a sense of belonging to accommodate everybody to come to the southwest region for trade, commerce and every other legitimate thing, and we will not allow anyone to come here, rape our wives and daughters, kill our farmers, destroy our farms and kill our people unnecessarily. We will not allow that.

“Here is my message to Mr Governor, Engineer Seyi Makinde on behalf of the leader of Yoruba Worldwide namely, Prof Banji Akintoye. We commend our governors for floating the phenomenon security project. It is in appreciation of this great ventures that all the Yorubas Worldwide have risen to express their massive support for the project which impliedly is appreciating you.

“While I am, therefore, appreciating you is why I am thanking you for the challenge which we are posing to you now which is that there should be no retreat in your commitment to the idea until we have peace in our lands and therefore asking you to give your total support across the board to the executing bodies of this project namely, the DAWN Commission and the Yoruba World Congress and our amiable Yoruba leader, Prof Banji Akintoye.

“Right now, as it is happening here, so also it is in other six Southwest states. We are only trying to tell the Governors that they are not alone in this game. It is unfortunate that the people that should give us adequate security refused to do so. What I want to tell you categorically is that security is an environmental matter. You just have to have an idea to secure your own environment. No matter what.”