The story has been tod of Akhimien, the karate brown belt holder who is just five years old. 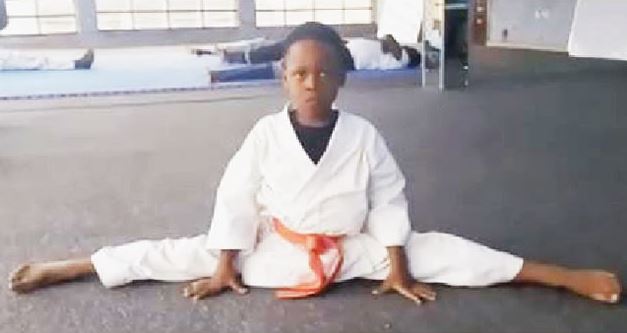 Combat sports like boxing, kick-boxing, taekwondo, karate are a no-go-area for many parents.

The fear of injury has often discouraged parents from allowing their wards to venture into the world of combat sports.

But for five-year-old Jethro Akhimien, it seems this apprehension stoked his parents’ desire to see the toddler become a karate champion, instead of killing it.

“I want Jethro to excel in this sport to the point of representing Nigeria at international level,” Victor told Sports Extra.

“I have the firm belief that with the way he’s going, by the age of seven or eight, he should have his black belt. I want him to believe in himself.”

An excited Jethro admits he’s in love with the sport, while also revealing how he started his journey.

“I started this sport when I was two years-old and I have been in it since then.

He continued, “I was introduced to the sport through my father, who is a karate leader at the highest level. I learn a lot from him.”

The nursery two pupil of Grace International Academy, Lagos is basking in the euphoria of being a karate student, admitting that bullies in schools and in the neigbourhood don’t want to cross his path.

“No, I have never been bullied by anybody. They don’t mess around with me. Though, my parents have always encouraged me to report such incidents at school to my teachers and also to them.”

Was there a time he got injured while training, our correspondent asked Akhimien.

“Not really, but sometimes, I get kicked in the groin and its very painful,” he replied.

Combining sports with education can be tasking at times, but Jethro and his father got that all worked out.

“I attend school during week days and I go for my karate classes on Saturdays. Sometimes, I train alongside my father at home too,” he stated.

Yet to win a title, the karate sensation says he is confident ahead of his first tournament, coming up later this month.

“I am yet to win a medal but I’m confident. I am preparing for a tournament.”

Jethro is a chip off the old block, revealing that his father is his role model.

“My role model is my father who has attained a lot in karate. He holds several titles. I also want to win different tournaments and medals. I want to represent Nigeria in this game.”