The Supreme Court, few weeks ago, affirmed the election of Okezie Ikpeazu as Abia State Governor. 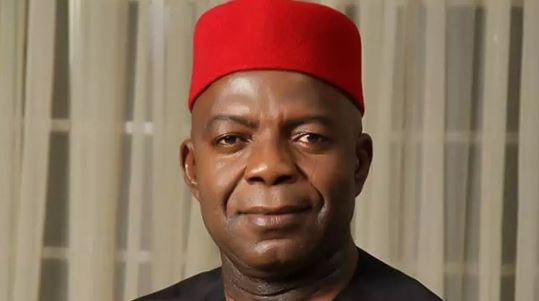 The All Progressives Grand Alliance (APGA), has insisted that Dr. Alex Otti, the governorship candidate of the party during 2019 election in Abia state, remained suspended in APGA as the Abia State Working Committee (SWC) chapter was yet to lift the suspension slammed on the renowned financial expert.

The party also insisted that Otti never consulted or informed the leadership of APGA in the state on his petition, challenging the reelection of Governor Okezie Ikpeazu of the Peoples Democratic Party (PDP) in the March 9th 2019 poll for a second term.

The Supreme Court, few weeks ago, affirmed the election of Okezie Ikpeazu as Abia State Governor.

It was reported that an Appeal Court sitting in Owerri, the Imo state capital and headed by Justice R.A Adah, struck out the appeal filed by the All Progressives Grand Alliance (APGA) candidate in the 2019 governorship election in Abia State, Alex Otti, and validated Governor Okezie Ikpeazu’s victory of the Peoples Democratic Party (PDP).

Earlier before the appeal court judgment, a three-man panel of the Governorship Election Petition Tribunal sitting in Umuahia, Abia state capital, and chaired by Justice A.L. Ogumoye, had dismissed the petition filed by 2019 APGA gubernatorial candidate, Dr Alex Otti against the declaration of Gov. Okezie Ikpeazu.

The tribunal ruled that the petitioner failed to prove the case of over-voting, non-compliance to the INEC election guideline and the electoral act.

Alex Otti had prayed the tribunal to cancel fifteen out of the seventeen local government areas election results in Abia State, alleging that the respondents, Governor Okezie Ikpeazu, who was the governorship candidate of PDP, perpetrated excessive malpractice in those LGAs in the last March 9, 2019 election conducted in the state.

However, Sunday Onukwubiri, the Secretary of the All Progressives Grand Alliance, APGA, in Abia state, during a radio programme tagged”Open Parliament”, and monitored by our correspondent on Wednesday in Umuahia, said that APGA was not part of the litigation against Ikpeazu and PDP, added that the party opted out over the subsisting suspension placed on Otti.

He said, “APGA was not part of Alex Otti’s petition in court, because, he was suspended by the party leadership after the 2019 general elections.

“He went to court with members of his Abia First structure. He never informed the party. He remained a suspended member until the SWC say otherwise. He was suspended for anti-party activities”.

Meanwhile, recall that the Abia State Working Committee of the All Progressives Grand Alliance (APGA) had slammed last year, an indefinite suspension on the Governorship Candidate of the party in 2015 and 2019, Dr. Alex Otti.

The suspension was announced in a statement jointly signed by the Chairman and Secretary of the party, Rev. Augustine Ehiemere and Sunday Onukwubiri.

The party accused Otti of engaging in anti-party activities, saying that he equipped his political machinery, known as Abia First, to harass party officials and create divisions in the party.

It also accused Otti of indulging in illegal and unconstitutional activities as well as acts of insubordination to the party leadership, which “undermined the principle of party supremacy”.