A female student of the Obafemi Awolowo University has spoken about how a lecturer sexually assaulted her. 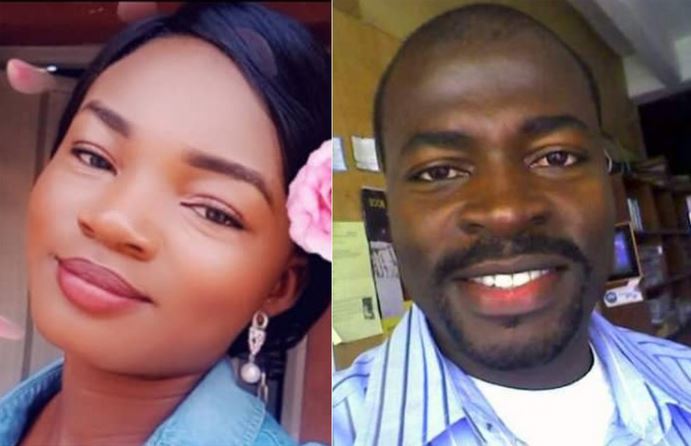 The student and the lecturer

According to a report by Vanguard, Miss Afolayan Motunrayo, a final year student of the Obafemi Awolowo University, OAU, has disclosed how she was allegedly molested by her lecturer, who insisted on having s*x with her to avoid failing his course.

Motunrayo, a final year student of International Relations at the university had alleged that her lecturer, Olabisi Olaleye had harassed her sexually after failing her in a Diplomacy course with code IRS 305.

She said the lecturer, in the presence of a male student, molested her in his office when she went to seek adjustment to the time of the paper which clashed with another 400-level examination.

According to her, Olabisi claimed that he knew that she would come back to beg him and having refused  to visit him at home she would fail the course again.

Narrating her ordeal, she said: “Our class representative told us that the lecturer said we should come and check our results in his office, which actually is not normal because we have a portal where we check results.

Like everyone, I went there to check and he told me I scored 38 out of 100 and that I should leave his office. I left but the class representative said the lecturer wanted to rectify any hitches for those who had problems before it is posted on the portal. So I went back to him yet, he insisted I leave his office.

”I had to register the course again but could not attend the class because it clashed with another course. I then went to him to seek his permission to excuse me from the class. But when I heard through other students that he was threatening those who were not attending the class that they would fail the course, I went back to his officer again.

“And that was when he started saying I should come to his house to cook for him, spend the weekend with him. He said if I can agree to have sex with   seto  ha sex with him, I may not even write the sex with him that that I will pass. I refused the offer.

”After a while, the examination time table was released, I discovered that the paper clashed with another 400-level course, and when I got to the department to lodge complain I discovered he was the exam coordinator and I had no choice than to meet him again. When I met him, he just laughed and said he knew I would come back. I found out that he wouldn’t force you because he knows you  don’t have a choice.

”So, he started saying since I refused to heed his advances, I would have to fail the course again. I pleaded with him to adjust the time table, he said he wants us all to fail again. All of a sudden, he moved close to me and started pulling my clothes, harassing me and forcing me to hug him. There was a guy in his office at that time and something just struck me to record him.

”I told him to let me go since he said he would not adjust the time table. He tried to kiss me, I pulled away and immediately left his office. I later went to the HOD and the time was adjusted. I wrote the exam and rushed to the other paper where we were given extra time.”

She disclosed that despite reporting the issue to the management her result has not been released, adding that some other female students were emboldened by her action to disclose their experience with him.

“I didn’t know he was doing that to other girls until I told someone who linked me up with the management before other girls started complaining.

”Some other girls were not bold enough to come out so we created an anonymous WhatsApp group where every girl dropped complaints.”

Olabisi, according to her was married but had been divorced by his wife due to his randy activities with girls in the school, but he was deceiving girls that his wife was abroad.

As at now I have not seen my result online but I heard it was given to another lecturer. I felt bad to have failed the course because I have never failed a course before. I am not the best student but I am also not very bad. That is the only course I have ever failed,” Miss Afolayan lamented.

Efforts to get reaction from Olabisi proved abortive as his number was diverted. However, it was gathered that during one of his defence before the panel, he denied requesting sex from any student.

He attributed delay in the release of the student’s result to his co-lecturer who had not released the scores.