Nigeria's Attorney General of the Federation, Abubakar Malami has said he never said Amotekun is illegal. 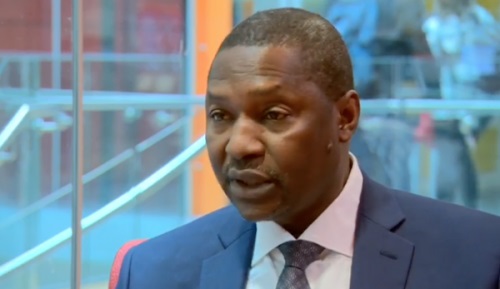 Nigeria's AGF, Abubakar Malami
The Attorney General of the Federation, Abubakar Malami, has recanted his earlier statement on Amotekun.
Malami said he was misquoted on the South-West regional security outfit codenamed 'Operation Amotekun'.
He made this known while responding to a question during a chat on Radio Nigeria Abuja on Thursday morning.
Malami, explained that he did not say that Amotekun was illegal.
He stated, “I was misinterpreted on Operation Amotekun, I did not say it’s illegal.
“I said the Operation Amotekun should be properly backed by law, so if at the end of this government, if the operation has been backed by law, any government that eventually succeeded this government would not rubbish the operation.
“I said if they failed to enact a law in support of Amotekun in the South-West Region of Nigeria, another government can come and say it’s illegal and this is because it is not backed up by any law.
“So, it is just a piece of advice to the state governors to use their power and the State Houses of Assembly in their various states to enact a law that will make the operation more effective.”
Furthermore, in a statement by his media aide,  Dr Umar Gwandu, Malami maintained that the constitution did not recognise regional security outfit.
Gwandu quoted Malami as insisting that regional security architectural arrangement by states was not tolerated by the constitution.
The minister said, “The planning, execution, consummation of whatever security arrangement must be naturally grounded in law, rooted in the constitution and tolerated by the law.
“For any arrangement to stand within the law, the bottom line is that constitutionality and legality must be factored.
“Provided that there is an aberration relating to constitutional compliance, I think the right thing to do is to ensure constitutionality and legality both in spirit, planning, concept, and consummation.
“If you are talking of regional arrangement, for example, at what point did the state assemblies come together as a region for the purpose of coming up with a statue or a law that can operate within the context of the constitution, taking into consideration the federating arrangement that does not allow or tolerate a regional state House of Assembly arrangement.
"You cannot independently, unilaterally operate in the provision of the constitution without recourse to the constitutional authority that is the bottom line.
“Working together, helping the Federal Government in the provision of security is indeed a welcome development but it has to be rooted in the law and within the context of working arrangement with institutions constitutionally established and not a unilateral exclusive arrangement by a regional body.
“In the circumstances of Amotekun, it is the idea of unilateral control that it is the problem without recourse to the institutional and constitutional arrangement that is put in place by our constitution.
“You can indeed provide whatever support and consideration but definitely it must be rooted in the constitutional arrangement and so self-help by way of unilateral arrangement cannot be tolerated with particular reference to a regional arrangement which is not rooted in the constitution within the context of security.”
Top Stories