As many as three persons have been arrested at a bus stop with a stolen child in Ogun state. 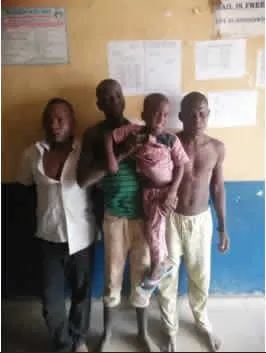 The victim with the culprits

The suspects, who were said to be from Jigiwa State, were nabbed at a bus stop at Arepo, on the Lagos-Ibadan Expressway with the stolen child.

The state Police Public Relations Officer (PPRO), DSP Abimbola Oyeyemi, said the three strange men were waiting at the bus stop to board a commercial vehicle when they were arrested.

He identified the suspects as Abubakar Saidu (22), Danladi Abdul Karim (30) and Abdullah Idris (25).

The PPRO said the suspects, who could not give satisfactory explanation, were apprehended last Friday with the help of members of the public.