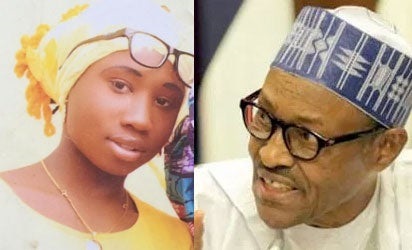 Leah Sharibu and Muhammadu Buhari
Father of Leah Sharibu, the Christian girl held captive by Boko Haram terrorists, Nathan Sharibu on Monday accused President Muhammadu Buhari led Federal government and Ahmed Salkida, an investigative journalist of knowing the whereabouts of his daughter.
According to Punch, Mr. Sharibu said he would absolve the pain that his daughter has become a mother to a baby belonging to one unknown commander of the dreaded group but insisted that FG and Ahmed Salkida know where Boko Haram kept his daughter.
His words, as cited by Punch, “There is no qualm. I have been receiving lots of calls from last night but all I can say is that it is well. If that is the will of God it is well. Whatever they have done I receive it with all pleasure.
“The government knows of Leah’s whereabouts. I repeat the government knows Leah’s whereabouts, more or less Ahmed Salkida. The government knows about her whereabouts. But whatever it is, I don’t have anything more to say, than to receive it (the condition of Leah) with all pleasure”.
Recall that Leah was on February 19, 2018 at 5:30 pm, kidnapped along with 110 schoolgirls aged 11–19 from the Government Girls’ Science and Technical College (GGSTC).
Dapchi is located in Bulabulin, Yunusari Local Government area of Yobe State, in the northeast part of Nigeria.
Since then most if not all of the abducted girls have been released except Leah, who vowed not to renounce her Christian faith.
Top Stories