NSCDC has arrested some cafe operators who were found selling JAMB form for a larger amount. 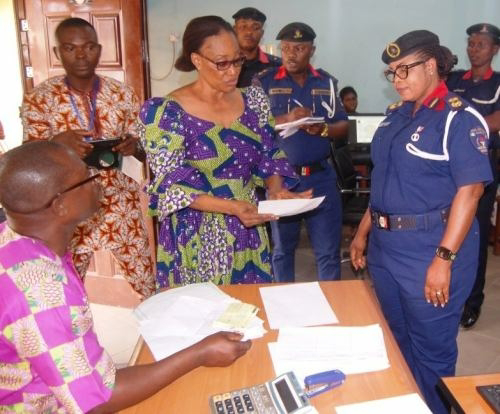 The State Commandant of NSCDC, Mrs Christiana Abiakam-Omanu told Newsmen that the arrest was made following complaints by JAMB officials to the command in Bayelsa.

Adiakam-Omanu, who spoke shortly after a visit to JAMB office in Yenagoa to monitor the ongoing registration for the 2020 UTME, said NSCDC frowned at the reported sharp practices.

“The NSCDC has been collaborating with JAMB in providing security for its examinations, materials and staff over the years and we have been involved in their operations.

“We got information from JAMB officials that some cybercafé operators were exploiting candidates and charging more than the approved N4,700 fees for the UTME.

“Due to reports of sharp practices in the registration process the Commandant-General of NSDC expanded the scope of our responsibilities to include the registration for the UTME examinations.

“We deployed personnel on surveillance and so far, three cybercafé operators involved in the syndicate charging students N6,000 and above for purchase of the form are in our custody being interrogated before prosecution,” Abiakam-Omanu said.

Speaking on the development, Mrs Beatrice Ette-Nyiam, Bayelsa Coordinator, JAMB, said the board was worried that in spite of efforts by the Federal Government to make the examinations affordable people still exploited prospective candidates.

Ette-Nyiam said that the board received complaints from candidates that the 2020 UTME PINs were being sold for as much as N6,500 per candidate at cybercafés who were not permitted to sell JAMB PINs.

“The board does not have any dealing with cybercafés, we have accredited entities that generate and vend 2020 JAMB PINs and we suspect that the cybercafés are in collusion with them.

“We shall ensure that any of the approved PIN vendors involved in illegal increase of the PINs would be sanctioned according to JAMB regulations and their approval revoked.

“The official cost of the 2020 UTME PIN is N3,500, Reading Text N500 and Service fee of N700 for the Computer Based Test, anything more that this is not acceptable to JAMB,” Ette-Nyiam said.

NAN recalls that the Federal Government had in November 2018 slashed the UTME PIN cost from N5,000 to N3,500 reducing total fees payable to N4,700 to ease the burden on parents.