The Commissioner for Information and Strategy, Mr. Gbenga Omotoso, made the announcement at the State House in Alausa. 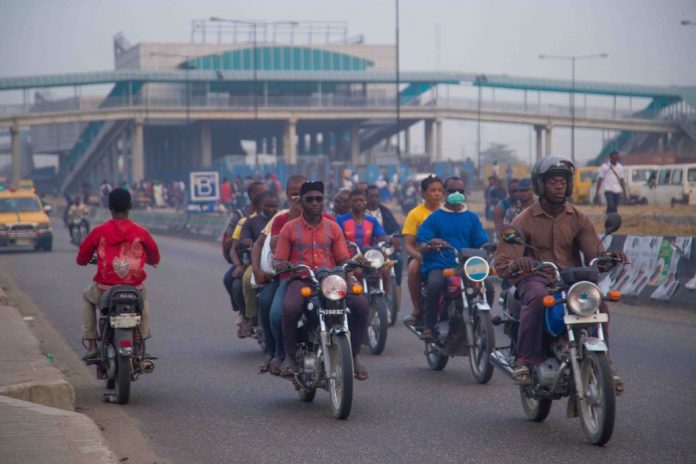 The state government directed security operatives to embark on a total enforcement of the State’s Transport Sector Reform Law of 2018 to immediately address the chaos and disorderliness created by illegal operations of Okada and tricycle riders in restricted areas. Besides, the government also banned Okada and tricycles from plying 40 bridges and flyovers across the state.

Commissioner for Information and Strategy, Mr. Gbenga Omotoso, who made the announcement at the State House in Alausa, said the measures were taken in response to “scary figures” of fatal accidents recorded from operations of Okada and tricycles in the state between 2016 and 2019.

He said: “After a robust assessment of the debate on what has been widely referred to as the motorcycle (Okada) and tricycle (Keke) menace, the Lagos State Government and the State Security Council have decided that the security and safety of lives of Lagosians are paramount. The figures are scary. From 2016 to 2019, there were over 10,000 accidents recorded at the General Hospitals alone. This number excludes unreported cases and those recorded by other hospitals. The total number of deaths from reported cases is over 600 as at date.

“Also, the rate of crimes aided by Okada and Keke keeps rising. They are also used as getaway means by criminals. Therefore, after consultations with stakeholders, the State Security Council, in compliance with the extant Transport Sector Reform Law 2018, has decided to commence enforcement of the law which bans the operation of Okada and Keke in six Local Government Areas and nine Local Council Development Areas (LCDAs).”

Lagosians yesterday took to social media to react to the development. Those against the policy felt the government did not take into consideration the frustrating traffic situation in areas like Apapa before taking the decision.

One Uche Fortunate, who claimed he worked at Apapa said: “Okada ban in Apapa? This seems laughable. Apapa, from Mile 2 to Warehouse road has not been motorable for years due to terrible roads and over subscription by articulated trucks that stay up a full month before they can cover a 10 minutes drive. How do you expect people go to work?”

Joseph Onyeanu said the government should have first provided alternative means of transportation before the total ban, wondering what will become of commuters who would be stranded at bus stops. “It cannot be a right move without measures to cushion the effect of this. There are no sufficient vehicles to convey the many commuters who will hang around bus stops,” he said.

Supporters of the ban said it would reduce accidents and other dangers associated with motorcycling, adding that the menace of the riders would also be curtailed. Sele Ijewere said he would love to see the policy implemented in Surulere but added that there might be resistance from the union.

One Ademoray said: “Fantastic move, about time we stopped being selfish and started thinking about tourism/tourists/visitors in our midst. Even for our own sanity in Lagos, which is now on the cusp of Yaba left. This madness and disorienting disorganisation on our roads need to give way for order.