Youths in Jos angry about the killings by herdsmen and bandits in the region have attacked Fulani settlements in the state. 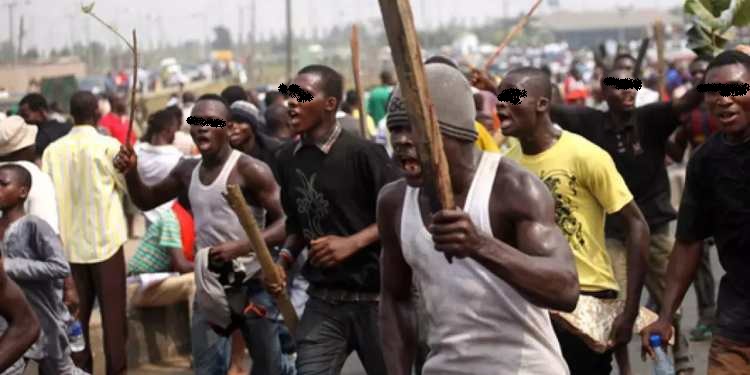 File photo
The killing of 13 persons in Kwatas village of Bokkos local government area of Plateau State has forced some angry youths in the state to attack Fulani settlements, setting ablaze 23 houses and a mosque within the locality.
According to Daily Nigerian, the information was revealed on Tuesday by the state chapter of Miyetti Allah Cattle Breeders Association of Nigeria, MACBAN, and a sister Fulani organisation, GAN Allah Association who confirmed the attack, saying that the incident is barbaric and condemnable.
While condemning the earlier attack that led to the killing of 13 persons, the groups described as unfortunate how the incident was hung on the necks of Fulani herdsmen in the area.
According to them, it is inconclusive to conclude that the attack was carried out by the Fulani as there was no evidence to prove same.
“We urge the security agencies to always do its homework before any declaration,” the MACBAN caretaker chairman, Isa Bappa, said.
He added: “It is equally regrettable for some youth in Kwatas to launch attack on Fulani communities as reprisal. Both incidents are barbaric and condemnable.
“We call on the security agencies in the state to as a matter of urgency ensure the arrest of the perpetrators all the attacks.”
While calling on the government and the security to investigate and fish out the perpetrators to face the wrath of the law, Mr Bappa urged all law-abiding citizens of the state to remind calm and embrace peace.
Governor Simon Lalong has met with security officers, major stakeholders, insisting that the perpetrators of Sunday night killings and destruction of properties must be fished out and arrested.
A statement by his director of press and public affairs Dr. Makut Macham, quoted the governor as giving the order during a security meeting he summoned at the Government House Tuesday.
He said: “How can they say that people are killed and there is no arrest. Are those killing others spirits? I don’t think you can kill 15 human beings and claim you are spirit and there is not arrest.
“Commissioner of Police, you should take the community leaders and the Ardos with you so that they can tell you those behind these killings. By the time you go to cell, you will bring out those people that are doing it. If you want to give evidence, give it to the commissioner of police. We are not afraid of criminals.”
He, however, commended the efforts of some community leaders.
“Some community leaders and Ardos have done their best but within us, there are criminals. We must expose them no matter how high. If you are one of them, you better take yourself to the police station.
“The Army is here, Police, Civil Defence, DSS, Operation Rainbow. I want those people today.
They should not sleep in their houses. By the time they are arrested, we will solve this problem,” the governor said.
Top Stories

Lockdown: Lagos Residents Above 60 Years Will Get Food Packages