PDP Lawmaker Who Defeated Akpabio Sworn In Again As Senator


Christopher Ekpeyong has finally been sworn in again as the senator representing Akwa Ibom North West. 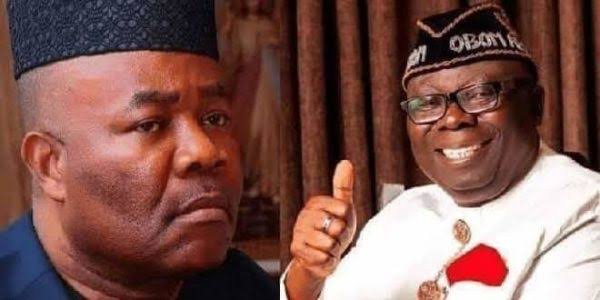 Senator Godswill Akpabio and Christopher Ekpeyong
The newly elected senator representing Akwa Ibom North West, Christopher Ekpeyong of the Peoples Democratic Party has been sworn in on Thursday by the President of the Senate, Ahmad Lawan.
Recall that Ekpeyong won the rerun election ordered by the Court and conducted by the Independent National Electoral Commission on January 25.
The Minister of Niger Delta Affairs, Senator Godswill Akpabio, who contested the February 2019 National Assembly election as a sitting senator on the platform of the All Progressives Congress, had dragged Ekpeyong to court.
Ekpeyong's victory was cut short by the Appeal Court which directed INEC to conduct a fresh poll.
In the fresh election, Ekpeyong defeated Akpabio again to gain the right to be sworn in as senator again.
Details later...
Top Stories