Some Yoruba indigenes have called on the government for justice for the daughter of Afenifere leader, Pa Reuben Fasoranti who was murdered. 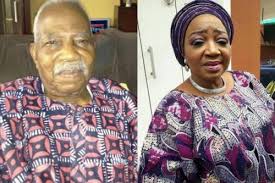 Some Yoruba indigenes in the South West states have made a fresh call on the Federal Government to ensure that bandits who killed the daughter of Afenifere leader, Pa Reuben Fasoranti are arrested.

The call was made by the Federation of Yoruba Consciousness and Culture (Alajobi) this through its President, Evangelist Kunle Adesokan in Ibadan.

The group has its members in Oyo, Ogun, Ekiti, Osun, Ondo and Lagos States.

Adesokan, who spoke on behalf of Professor Adebanji Akintoye on the day a solidarity rally was held in Ibadan, said it is unbelievable that months after the incident, no arrest has been made.

Speaking on the murder of the daughter of the Yoruba leader, he said, “till today, no arrest has been made or anyone prosecuted for the crime”.

Mrs. Funke Olakunrin was murdered on July 13, 2019, on Ondo-Ore road by unknown gunmen.

He added that the incident coupled with other criminality committed by hoodlums against Yoruba on their territory informed the conception of the Western Nigeria Security Network codenamed Amotekun.

Adesokan, who commended all the governors in the southwest zone of the country also expressed optimism that the new security outfit would check the insecurity in the zone.

To him, the support of traditional rulers in the zone such as the Ooni of Ife, Oba Eniitan Adeyeye Ogunwusi and others deserved accolades.

Amotekun,  he said, should be seen as “the Yoruba local security arrangement to tackle any attack on our lands without undermining the conventional police.

He called on members of the House of  Representatives to ensure that the law that would support the security outfit is enacted within the short possible time”.

Describing numerous attacks on Yoruba people as unacceptable, he stated that “lives of the residents in the state are threatened by bandits who seem to be enjoying the backings of criminal elements at the federal level”.

He called on all indigenes and residents in the South West to rally round Development  Agenda for Western Nigeria led by Mr. Seye Oyeleye, the initiator of the security summit which eventually graduated to the formation of the security outfit.

He also pleaded with the state governors of Lagos, Osun, Ondo, Ogun, Oyo, and the Ekiti States to ensure that all machinery is put in motion to kick start operations of the outfit.