Woman releases full proof and receipts online after Sapphire Boss, Wale Jana blocked and refused to pay her back after she invested in his perfume business. 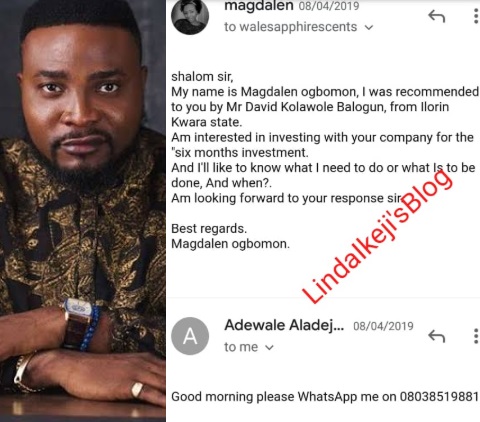 A widow has accused Sapphire Groups CEO Wale Jana of blocking her when it was time to pay back the 500,000 Naira she invested in his business.

Ms. Magdalene Ogbomon, a Nigerian mother based in Finland, said she invested in Adewale Aladejana's business last year when he called for investors on Instagram.

However, when the maturity date on her investment reached, she claimed she was not paid back her initial capital, neither was she paid back the interest on her investment. When she became persistent in asking for her money back, she alleged that he blocked her number so she couldn't reach him via WhatsApp.

Narrating to LIB how she found out about Sapphire Group, Ms Magdalene said she returned to Ilorin, Nigeria, last year and was informed by her daughter that a certain successful businessman was calling for investors. 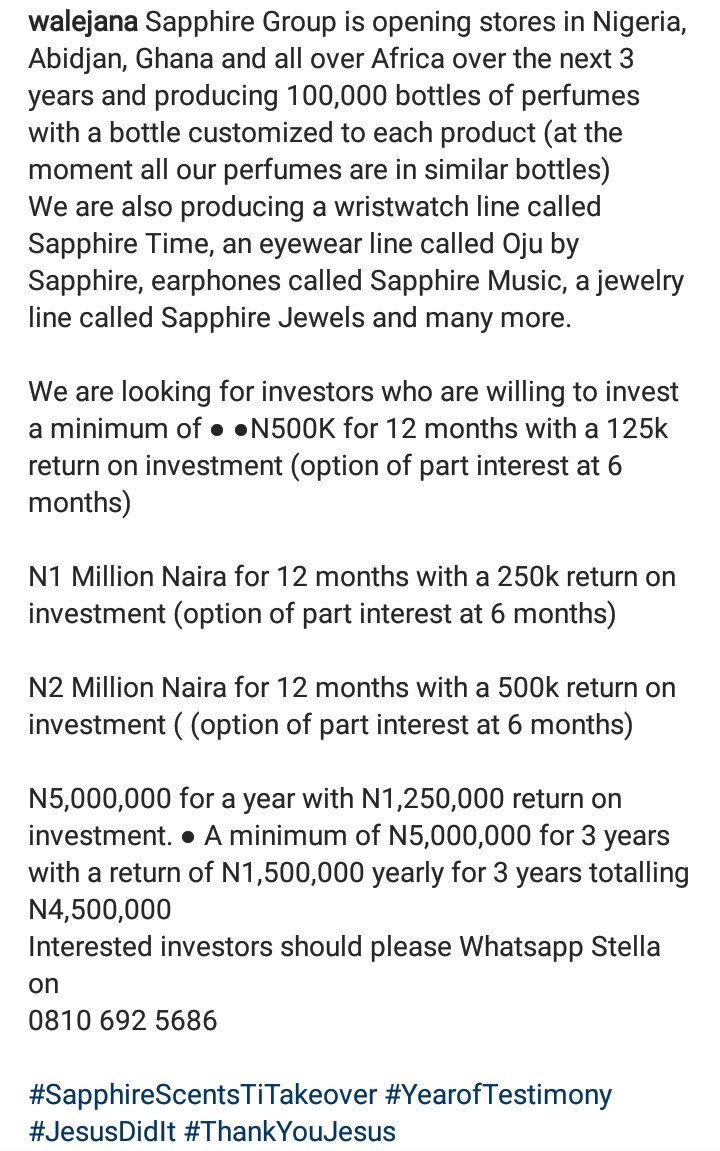 She said she was sceptical at first because of the bad news she has heard about Nigerian business owners. However, her daughter convinced her that he's trustworthy because they attend the same church.

She said her daughter then introduced her to a youth pastor in their church who claimed to know Wale Jana and he vouched for him.

Ms. Magdalene said she had some money set aside for her children's education and because she didn't want to be tempted to spend it while in Nigeria, she invested in Sapphire Groups for 6 months. 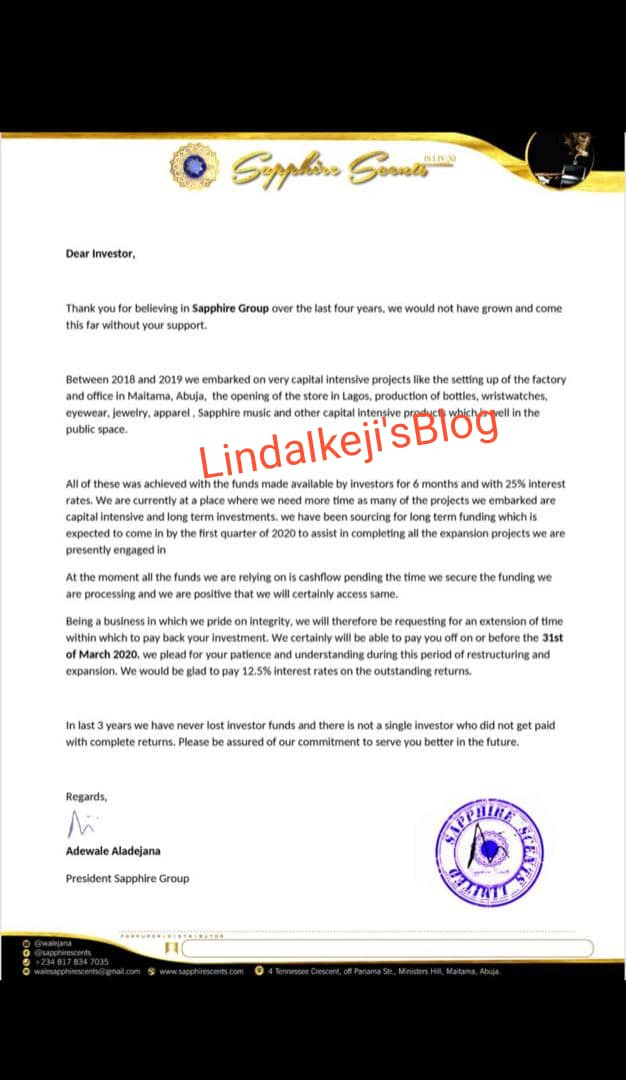 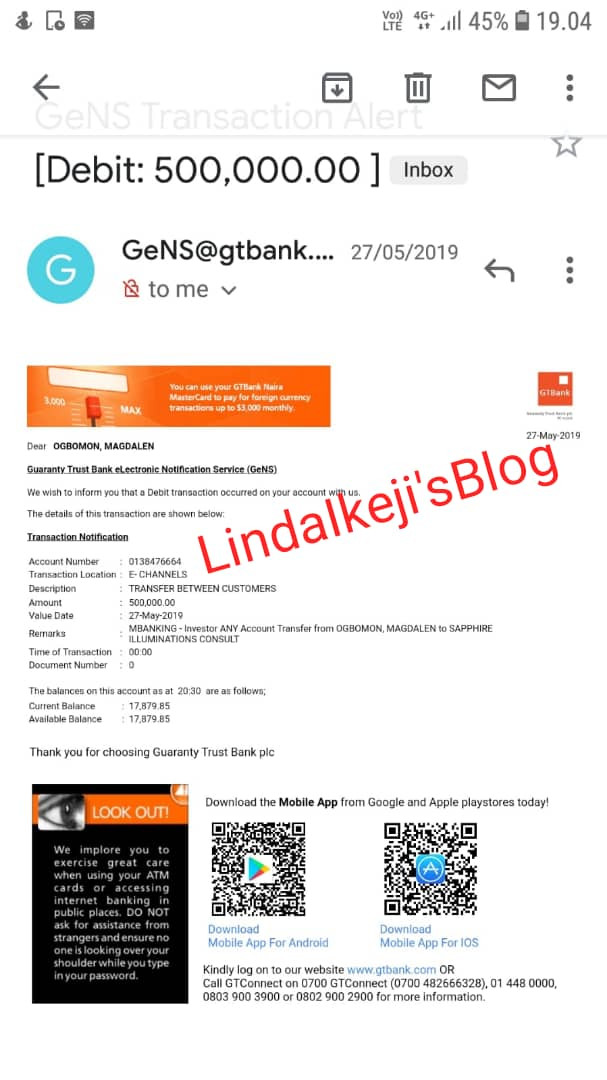 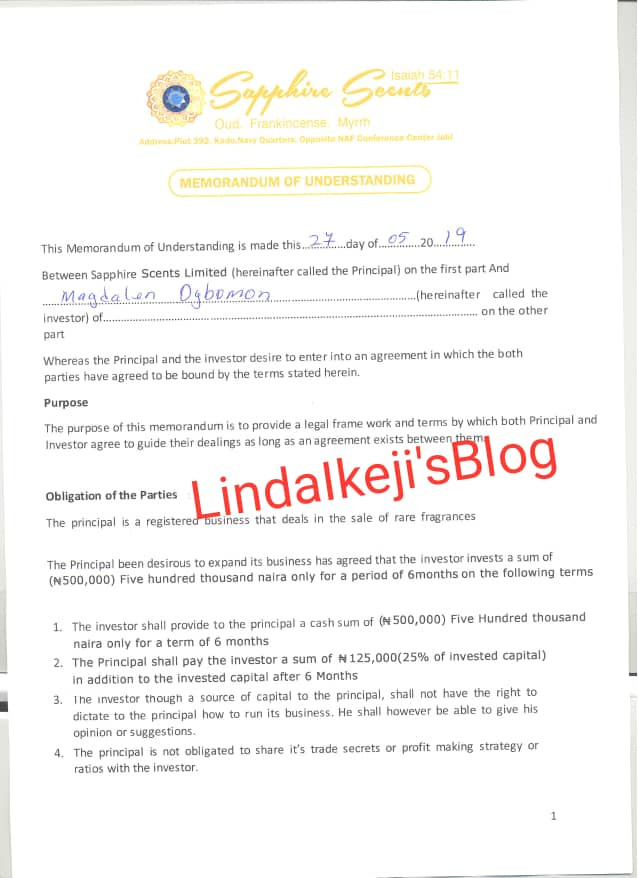 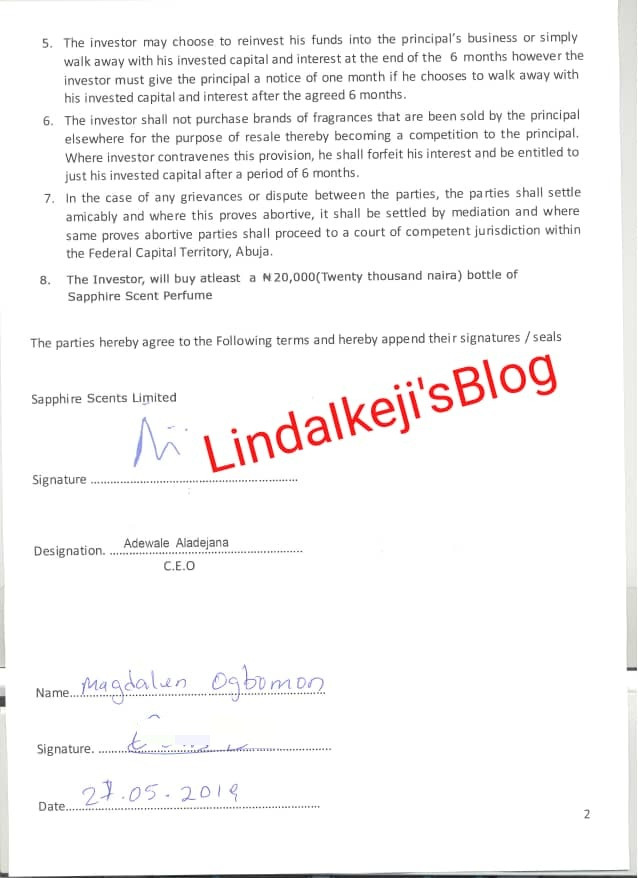 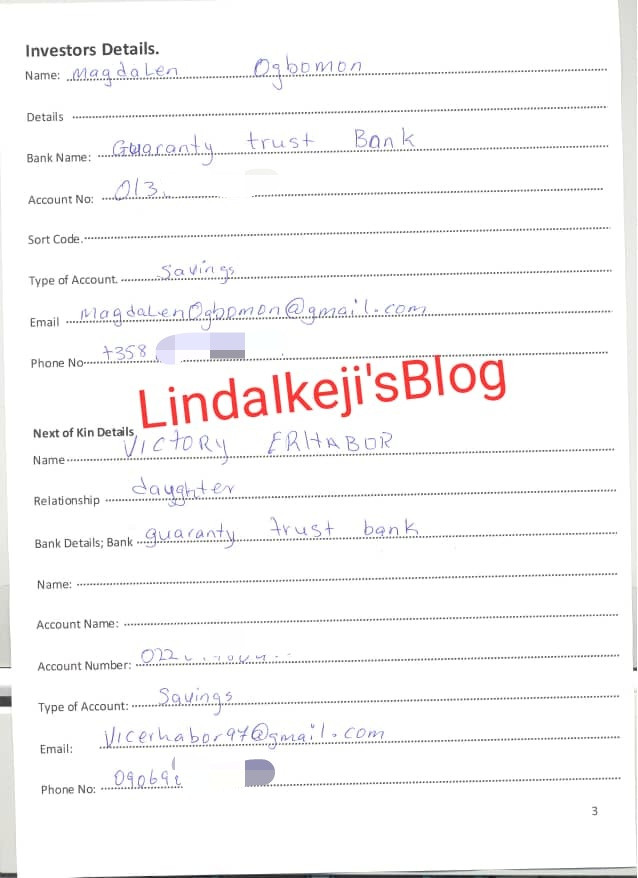 The contract signed by Wale Jana and Magdalene Ogbomon

However, when the 6 months was up in November last year, she didn't get her money back, neither did she get the interest.

She reached out to Wale Jana who promised it will be paid at the end of that month. However, she wasn't paid as agreed and a new year began.

At this point, she said she had become desperate because her children, who have been in Nigeria, were to join her in Finland to further their education and the money invested in the business was supposed to be for their education.

After her WhatsApp messages sent over the holiday period were ignored, she said she reached out to Wale Jana on January 1, 2020, explaining that she needed the money urgently.

"Mr Jana, You have deceived and disregarded me," she began in her mail.

Her mail also reads in part: "I toiled  for that money you may not understand. I DO NOT accept your 'appeal letter ' Neither will I leave the money for you.

"I was waiting for that money to do something very important, now all I have painfully put all on hold even after one month.

"If you had even speak or informed me last month I wouldn't have been this hurt."

She added in the mail: "I might sue you for fraud, and so on. but I am not doing so now.

"No matter how small you think that money is, and insignificant you think of me That you ignored/treated me this way, you sent to Stella arrogantly treat  me.

"Except God becomes suddenly bribable/corrupt then you are free." 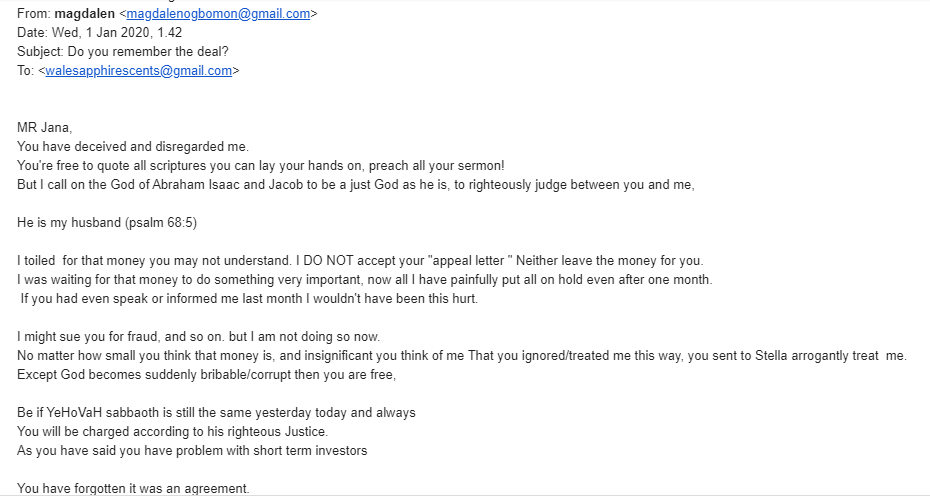 When her plea for her money still yielded no result, Ms Magdelene said she sent Wale Jana a message on WhatsApp, asking him the cost of flight tickets from Lagos to Finland. She then suggested that he could pay her money back by booking her kids' flight ticket to Finland. 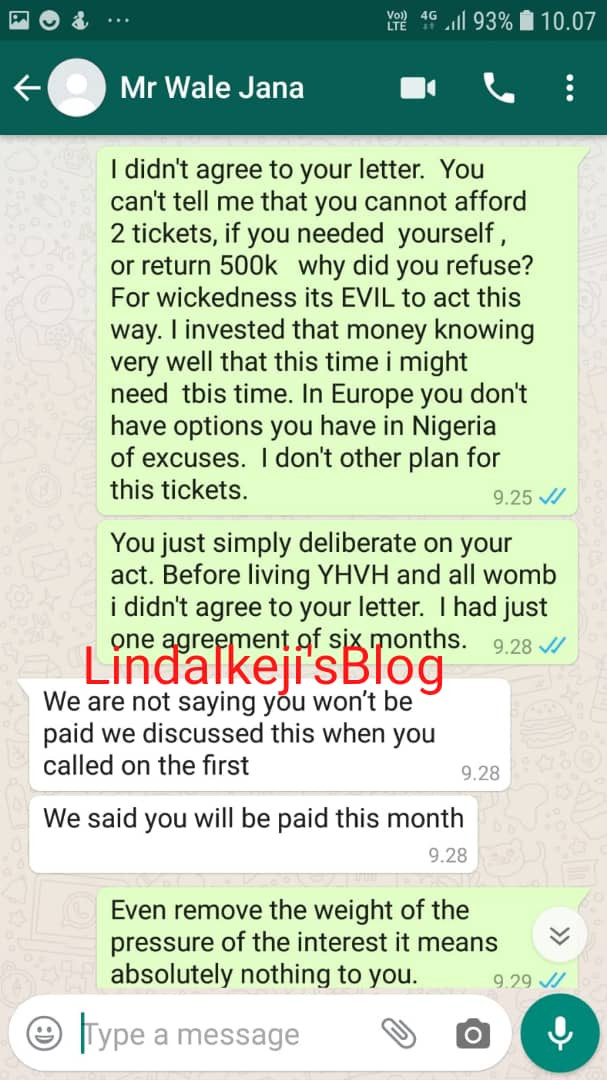 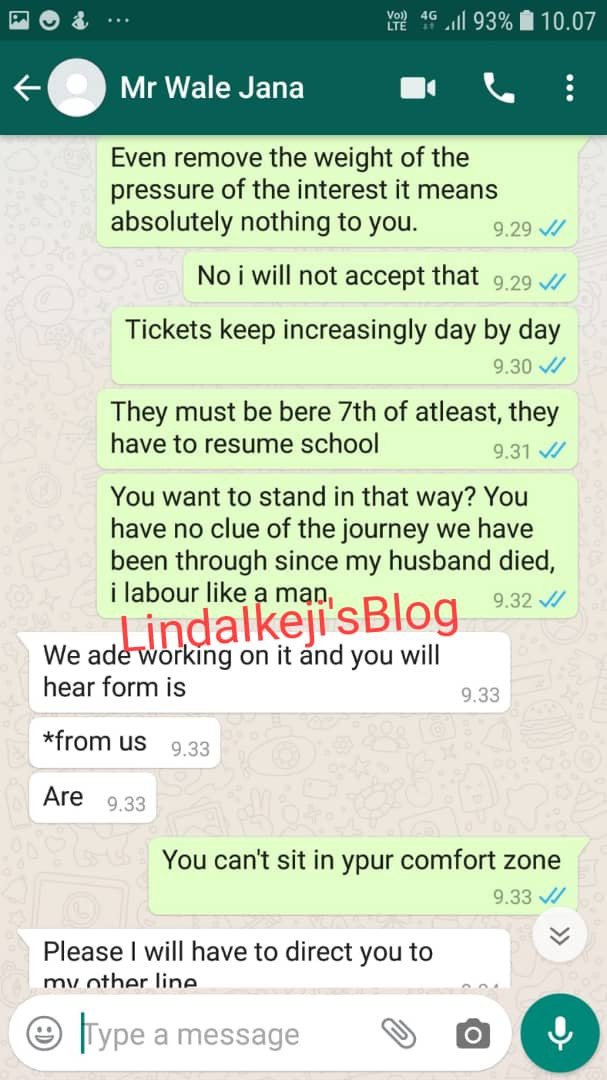 However, she said he ignored her.

She said that after a while, she felt she was facing those challenges because she went against her religion. According to her, her religion forbids collecting interest on money loaned.

As a result, she said she reached out to Wale Jana and asked him to forget about the interest and just pay her the capital she invested in his business. This also yielded nothing. 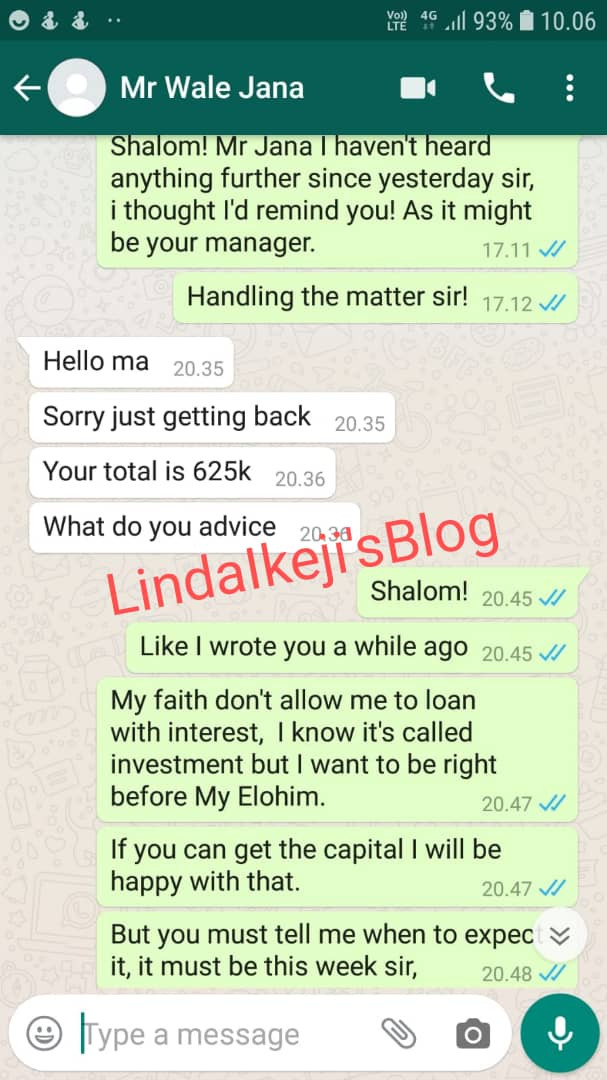 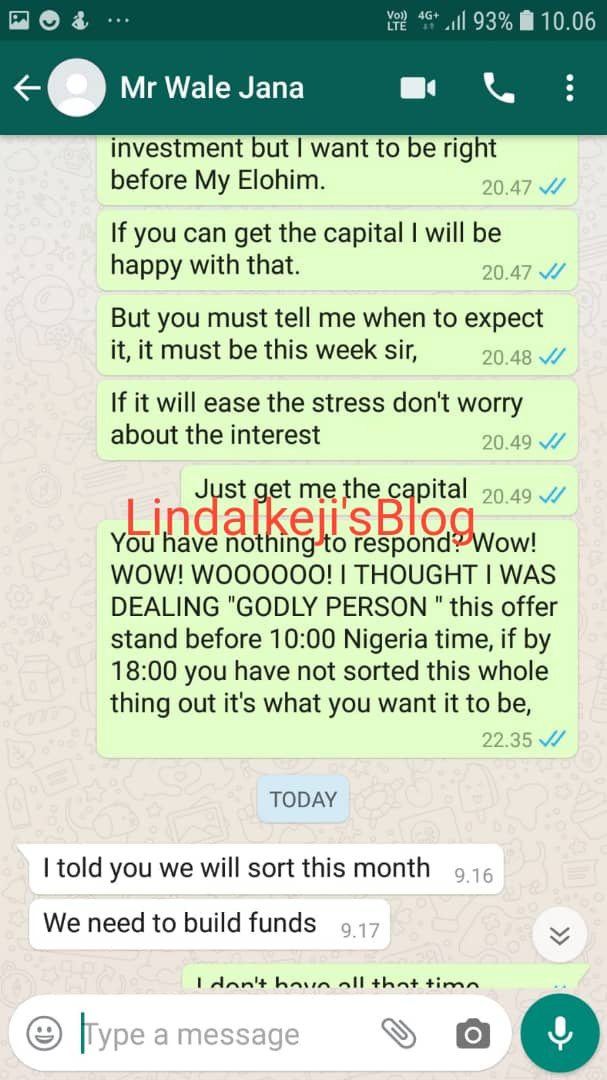 He later blocked her so that she couldn't reach him.

She said she had no other choice but to ask her daughter to contact Wale Jana, but her daughter was also dismissed by the businessman. 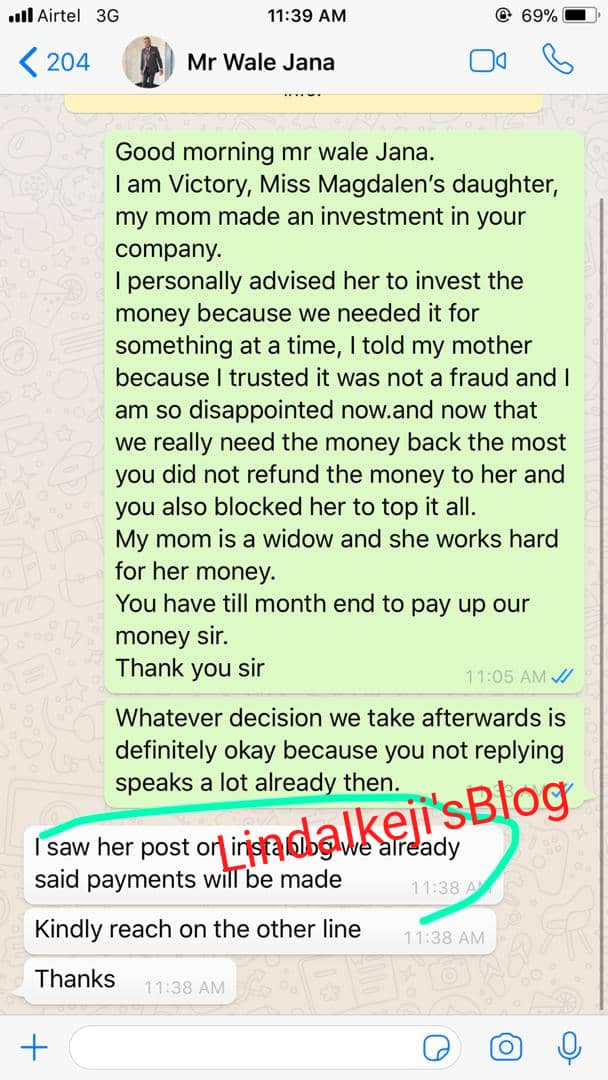 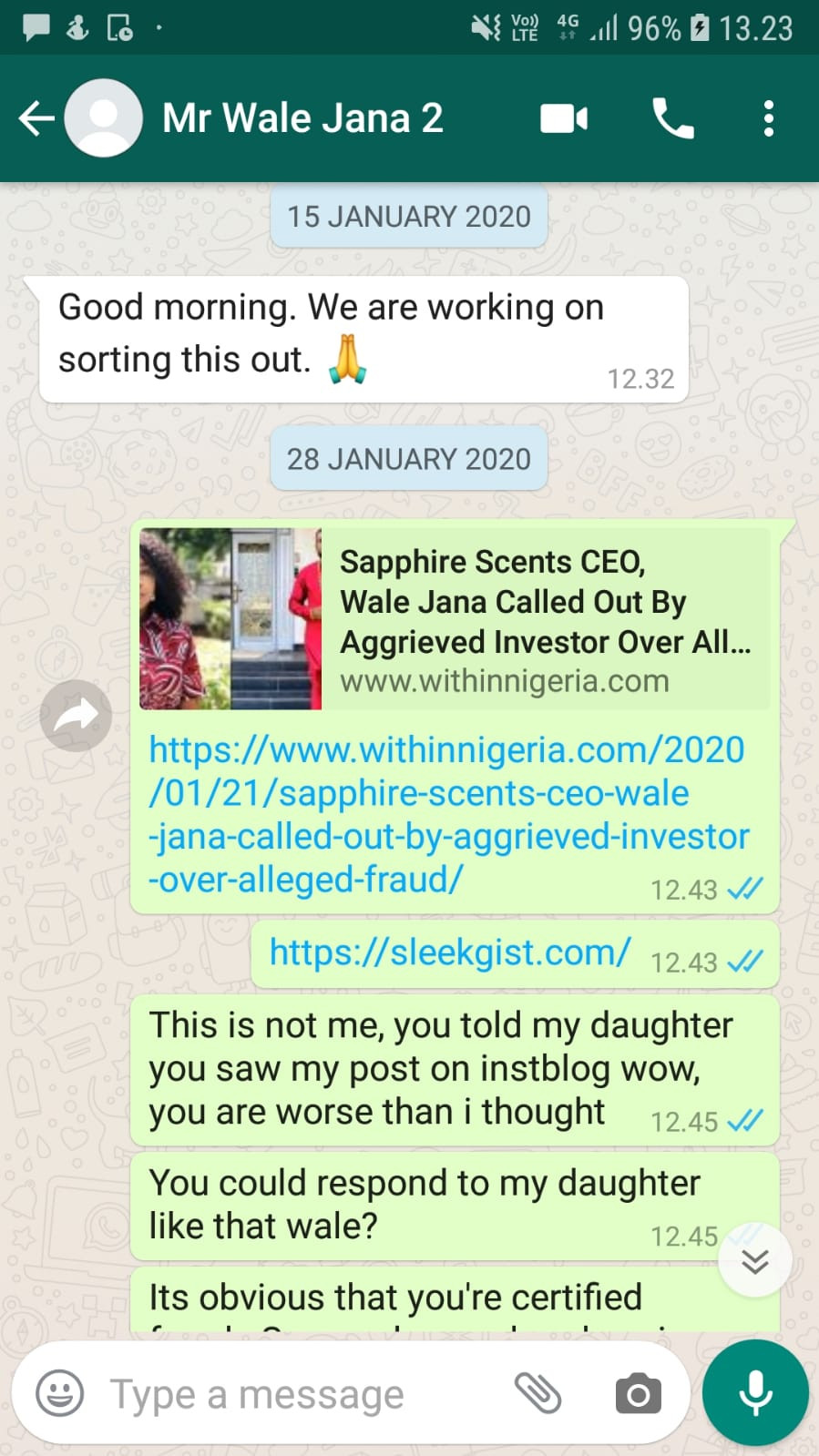 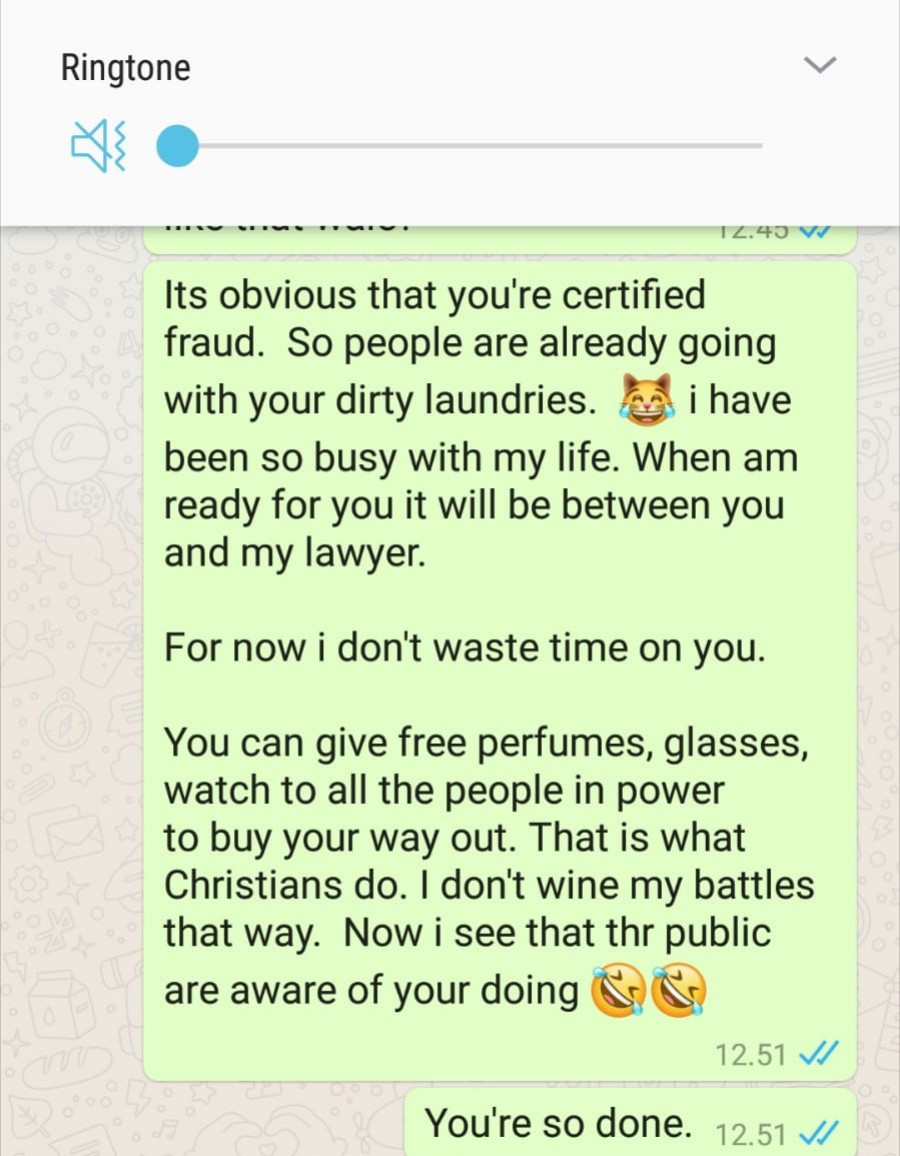 Ms Magdelene also claimed that another aggrieved investor reached out to a blog with her own story and when Wale Jana saw the news article, he thought it was Ms Magdalene who had exposed him to the blogs so he confronted her daughter about it.

Ms Magdalene says she has reached out to the youth pastor who vouched for Wale Jana but he hasn't been of much help. She said she has also sent a message to COZA founder, Biodun Fatoyinbo after she was told that he is someone Wale Jana respects. However, she got no reply to her mail.

Having tried every means to get her money back, Ms Magdelene says she feels her only option is to share her story with the public since her kids will resume school this February and she needs to pay their school fees.

She added that she is a widow and is the only one providing for her kids from the little her job in Finland pays.

She said Wale Jana's action makes her upset at religion and how religious people preach one thing only to practice another. She added that seeing him preaching on Instagram usually confuses her, considering that he's not practising what he preaches.

LIB has reached out to Wale Jana but he has not responded yet. 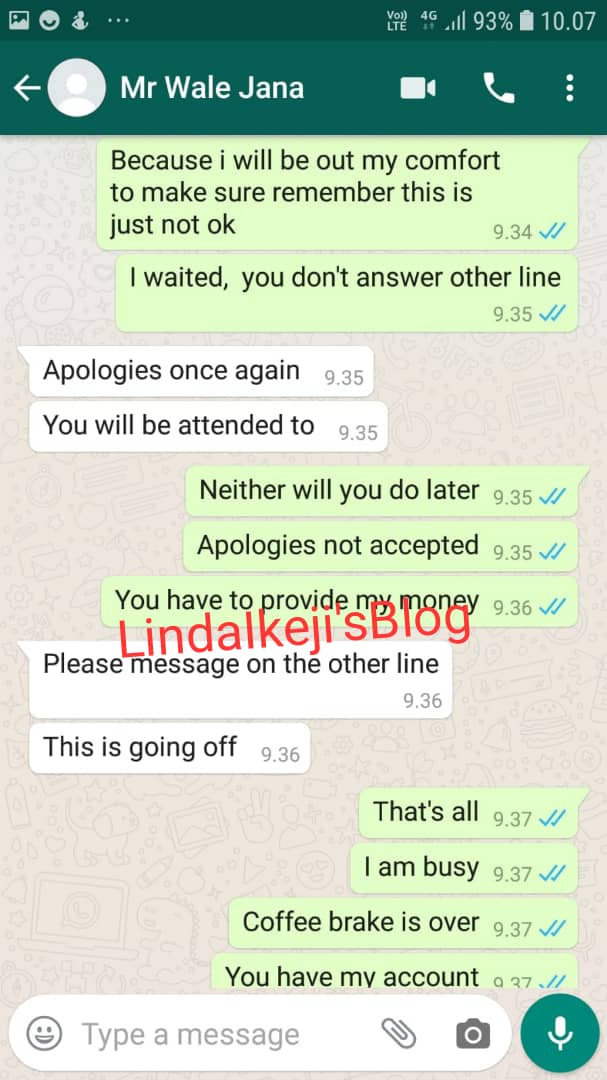 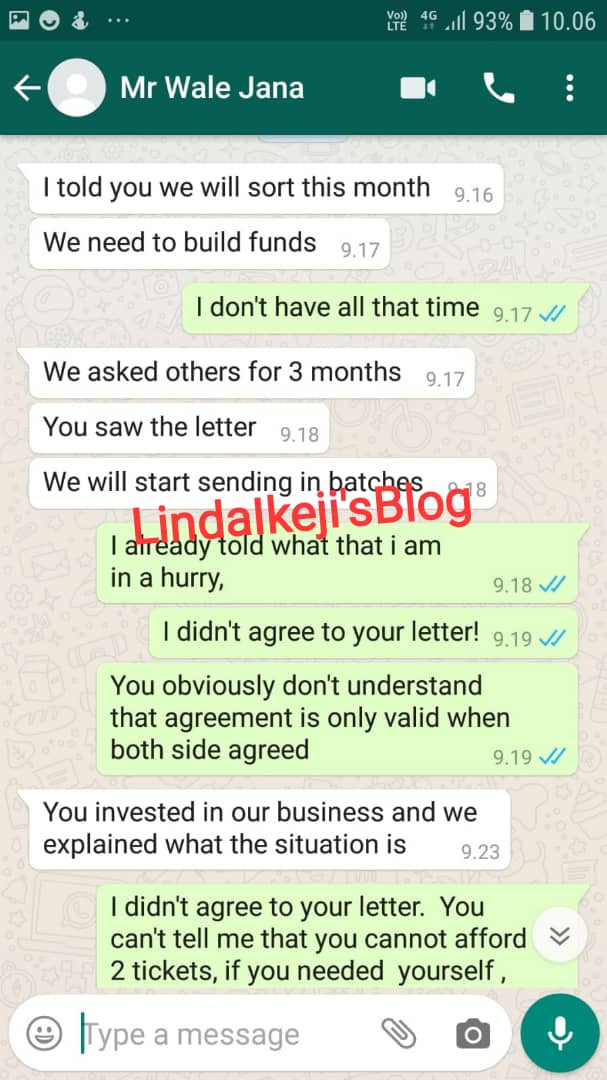