A man identified as Lukman Ogunbi has debunked claims saying he killed his wife stating that she died of complication during childbirth. 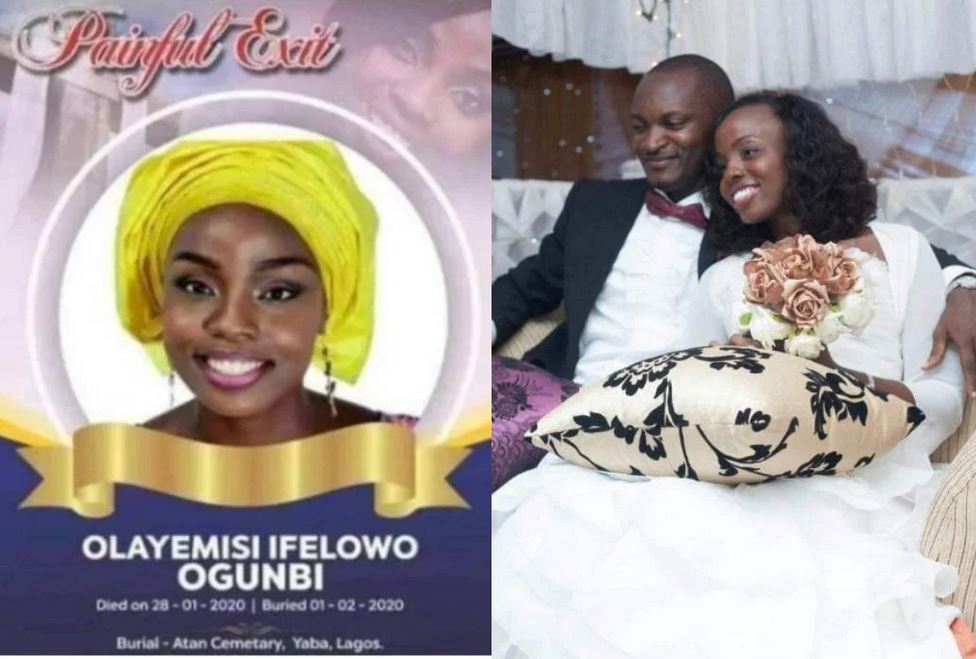 Olayemisi Ifelowo Ogunbi’s husband has debunked the claim that he beat his heavily pregnant wife to death, leaving behind three kids.

Olayemisi Ifelowo Ogunbi who died on January 28, 2020 was said to have been heavily pregnant when he husband beat her up leading to several complications which lead to her death but her husband has debunked this claim.

Yemisi’s husband, Lukman Ogunbi, claims that the screenshot of messages making the rounds where someone claiming to be a family member of the deceased claimed Yemisi’s husband was responsible for her death is “mischievous” as his wife died after suffering complications arising from childbirth.

According to Mr Ogunbi, after due diligence from the Ogunbis, “the suspected mastermind (name withheld) has been fingered and would surely face the music by God’s grace. Although she has had to deny ever doing that, there are facts and evidence there to prove that she did so out of mischief.

In a piece titled “Tribute” by the husband of the deceased, and made available to newsmen, Ogunbi said:

“I received with shock the rumour making the rounds, accusing me of being responsible for the demise of my late wife.

“Olayemisi Ifelowo Ogunbi was a lady of vigour, inspiration, dedication, love, character and moved around full of excitements. She enjoyed love of all especially family and husband till her demise. Though short, she lived an enviable life that afforded her marriage, three kids. She was a dedicated Christian (even though I as her husband practise Islam), a giver and enjoyed life till her demise.

“My wife was a graduate of Computer Science and Statistics from Olabisi Onabanjo University. She was creative and opened to knowledge. A young Nigerian that explored and earned living in the creative industry. She was an established make-up artist and graphic designer whose clientele included elites around the country.

“She was birthed to Ifelowo family and wedded to me. Both families are natives of Ogun State and members have impeccable personalities. Prior to our marriage and after her demise now, both families have continued a cordial alliance that has spanned fifty (50) years. Independently, either family could afford choice health service for her. My wife enjoyed love of both families, till her demise.”

Narrating the events leading to his wife’s death, he said;

“My wife visited LUTH on January 13, 2020 to complain of frequent contractions and was observed for seventy-two (72) hours. She gave birth by self to a son that’s hale and hearty, on January 18, 2020. However, there were delivery complications relating to loss of blood, blood pressure instability and sepsis.

“Both families were not willing to lose a jewel and had to commit hundreds of thousands of naira to admit Olayemisi to LUTH intensive care unit, on January 16, 2020. We were committed to her treatment and she enjoyed care and love at LUTH ICU.

Only if money, care and prayers could stop death, Olayemisi would be alive today. The team of doctors could only delay the death from birth complications that took at least eleven (11) pints of blood but we lost Olayemisi January 28, 2020. Her story is an unending one as she would be remembered for several years. We love her but the Almighty God loves her more.”

Yemisi was buried at Atan cemetery, Yaba, on Saturday, February 1. Her family and friends witnessed as she was laid to rest, according to her faith – Christianity. Both families have continued to mourn her painful exit. She is survived by her husband and three children.

He stated that the mischief-maker will have a litigation instituted against her soon.