The Supreme court has declared Bayelsa State governor-elect, David Lyon as the legally acceptable candidate of the APC in the last governorship election. 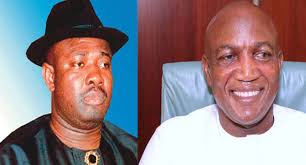 The Supreme Court, on Tuesday, affirmed the Bayelsa State governor-elect, David Lyon, as the valid candidate of the All Progressives Congress in the last governorship election in the state.

A five-man panel of the court led by Justice Mary Peter-Odili unanimously dismissed the appeal filed by Heineken Lokpobiri, who had instituted his case seeking to be declared the valid winner of September 4, 2019 primary election of the All Progressives Congress.

Delivering the lead judgment of the apex court, Justice Inyang Okoro affirmed the January 11, 2020 judgment of the Port Harcourt Division of the Court of Appeal, which had held that Lokpobiri’s suit challenging Lyon’s victory in the primary election was filed out of time at the Federal High Court,Yenogoa.