A man identified as Lucky who trended after a video of him slamming a minor for allegedly stealing from him has been arrested by the Police. 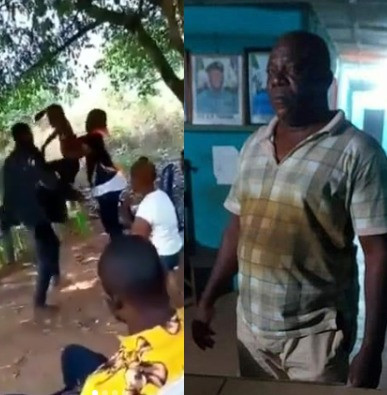 A middle-aged man has been arrested by the police in Ogwashi Ukwu, Delta state, after a video of him slamming a little boy on the floor over allegations of him and a young girl, stealing N750, went viral.

The man simply identified as Lucky, was captured on camera, slamming the little boy on the floor in  Agidiese Quarters, Ogwashi Uku, Delta State.

Harrison Gwamnishu, a Nigerian activist, who effected the arrest, told LIB that the little boy and girl who were attacked by the man, were in the community on an errand when they saw the money on the floor. It was when they picked the money that the man and some other members of the community accused them of stealing.

Gwamnishu said Mr Lucky is currently cooling his heels at the police station in Ogwashi Ukwu.

Man arrested after video of him slamming a little boy on the floor over allegations of stealing, went viral.