A Scorned ex who was ripped off by his former girlfriend stormed the venue of her wedding and destroyed everything. 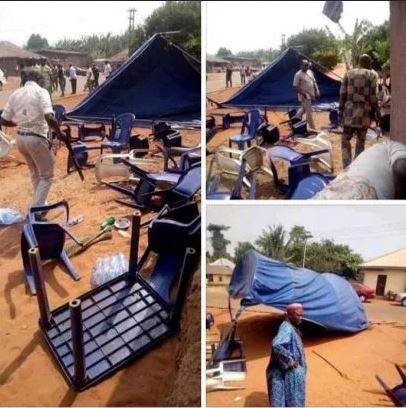 A man who was obviously angry and irritated by the sight of his ex-girlfriend getting married, stormed the venue of the event and destroyed it all.

The man who said he didn’t take the action out of jealously, but due to the fact that she owes him some money, stated that he won’t stop ruining her day till she pays him back.

According to him, he said he destroyed the marriage ceremony because his ex-girlfriend borrowed N450,000 from him to start a business but used her friend’s shop as her’s and diverted the money to sponsor her wedding ceremony with her new fiance.

He further said he gave her another sum of N200,000 to support her business, few weeks later she requested for a loan of N150,000 and promise to pay back after a month which she never did but decided to put an end to the relationship for no reason.