The son of Abdulrasheed Maina, a former Chairman of Pension Reform Task Team, has spoken about how his father syhphoned millions of naira. 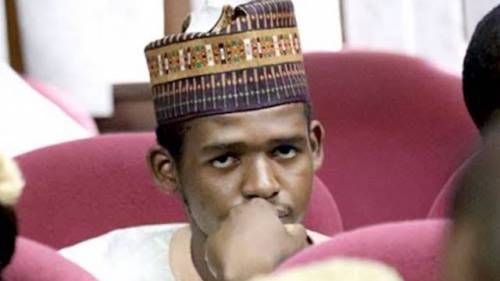 Faisal Maina, son of Abdulrasheed Maina, former Chairman of Pension Reform Task Team, has revealed to the Economic and Financial Crimes Commission how his father created a bank account for a farm without owning one and how the account was used to syphon millions of naira.

Faisal, who is being charged over an allegation of fraud to the tune of N58m and for operating accounts that were used as conduits for illegal transactions, also explained how he evaded arrest and attempted to shoot at operatives of the EFCC.

In a confessional statement of Faisal exclusively obtained by SaharaReporters, he confessed that he runs two accounts in the name of Faisal Farm 1 and Faisal Farm 2 even though his father and don’t operate a farm business.

It was observed that in his statement to the commission collected in the presence of his lawyer, most of his answers were neither in the affirmative or denial as he preferred to use “I do not recall” when answering questions related to bank accounts and companies that had his name on the documents.

Faisal revealed that he was listed as shareholder of some companies accounts belonging to his father, Maina.

He said he registered Faisal Farms and he and his father are the two signatories to the accounts domiciled with the United Bank for Africa.

“The company, Faisal Farms, has a corporate account at United Bank for Africa.

He, however, denied operating, owning or being signatory to any other accounts opened in his name.

Explaining one of the instances he saved funds into Faisal Farms account, he said that he converted dollar to naira before handing over to his father for deposit.

He said, “I deposit a total of approximately $8,000, which I converted into naira before giving my father and telling him that I wanted those gifts of money that I got to be deposited into the Faisal Farms account for the purpose of saving."

During another session of questioning by the commission, Faisal identified a company that had his name, siblings and mother as directors.

Explaining to the commission how he was in possession of a gun, he said he saw it in his car.

He said, “In an attempt to run for my life, I then began to drive and locked my car from inside.

“The soldiers began to shoot at my car in an attempt to kill or subdue me but they weren’t successful as the vehicle I was driving was armored.

“I saw the gun by the hole next to the driver’s seat, I picked it up, dropped it and later picked it up to go outside, which I then put the gun in my pocket as several officers were laying down positioned and aimed to shoot at me.”

Faisal and his father, Maina were arrested in September 2019 by a joint operation of the State Security Service and the EFCC.

They were officially handed over to the EFCC for further investigation and prosecution.

Maina, who had been on the wanted list of the EFCC for the past four years for N2.1bn pension fraud, was apprehended by DSS operatives in Utako, Abuja, shortly after entering the country from Dubai, United Arab Emirates, where he had been hiding.

Maina, sources said, had been in the country since June, 2019 but managed to evade arrest for many months until he was eventually apprehended.

Both are facing trial on separate but similar charges of money laundering and operating fictitious bank accounts.

Bobrisky Is My Closest Friend, I Will Never Betray Him - Tonto Dikeh
Recent Stories

Audio Donations? We Have Not Received A Kobo From Private Donations - Lai Mohammed