Boko Haram terrorists have sacked a town in Adamawa, causing massive destruction in the area. 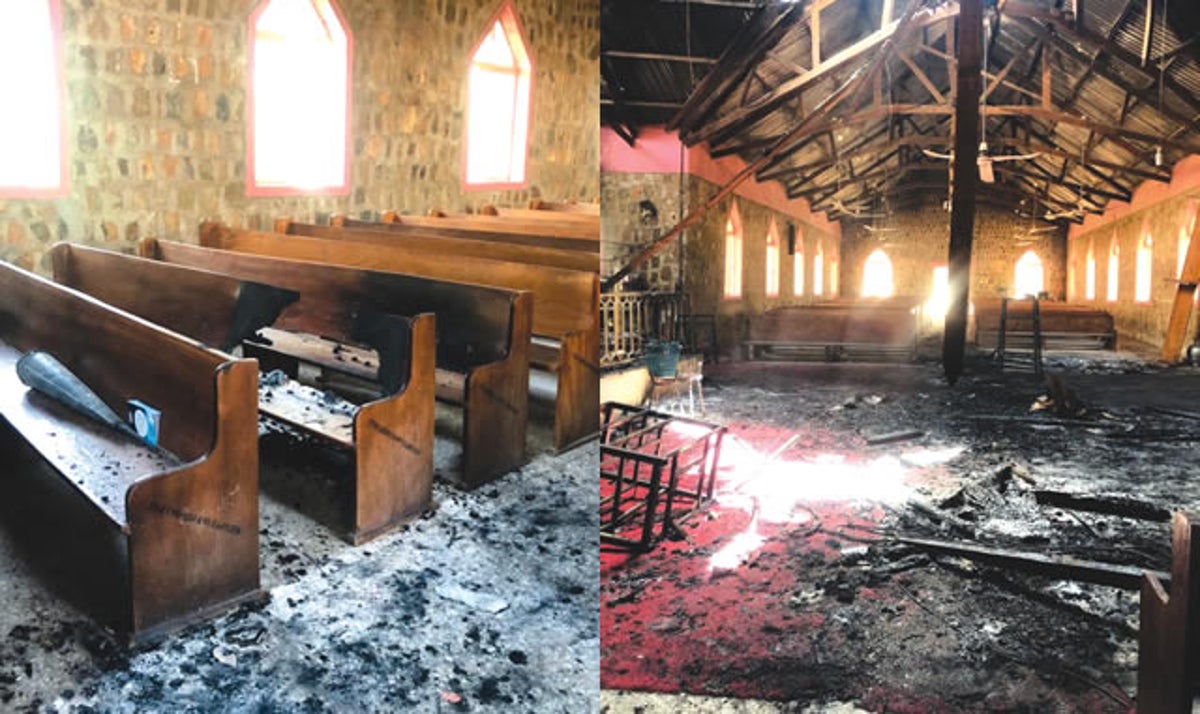 Some scenes from the attack

Fresh revelations have emerged on how Boko Haram insurgents attacked Garkida town in Gombi Local Government Area of Adamawa State for six hours on Friday night. The town is located on the Gombi-Biu – Damaturu Road, which shares proximity with Southern Borno and Sambisa Forest.

Reports say police barracks, churches and a house belonging to Gen Paul Tarfa (retd.) were among several buildings burnt by the terrorists during the attack.

Meanwhile, the Islamic State’s West Africa Province is said to have claimed responsibility for the attack, alleging that they killed three soldiers and took some worshippers in a church hostage in addition to other villagers in the community.

Personnel of the Nigerian Army were said to have engaged the terrorists in a fierce gun battle. But a native of the town, Mr. Joshua Malgwi, told Sunday PUNCH that many persons were feared killed by the invaders who announced their entry into the town by shooting aimlessly.

There were also reports that the residents sighted the terrorists and warned the soldiers in the vicinity of the impending attack before they (insurgents) eventually overran the town and started shooting.

Meanwhile, a source in the town also told Sahara Reporters that the insurgents came in their numbers with several vans to ransack the town, looting pharmaceutical shops and homes for foodstuffs.

The source said, “They had unfettered access because a battalion of troops in the town was withdrawn sometime back, leaving behind just a few soldiers who could not repel the insurgents. After looting, they burnt down a police barracks, police station, two churches; Living Faith and EYN, and a shopping mall.

“People were also killed but I have no record as of now. They also razed General Paul Tarfa’s residence, among other important buildings in the town.”

A tweet by @tntmagazinenigeria also showed a church that was eventually burnt by the insurgents. It read, “Where several houses, which included those of prominent sons of Garkida, market, churches; EYN, Living Faith and Anglican burnt. Rural health centre, two ambulances burnt while another two taken by the insurgents.

“Two soldiers lost their lives, civilian casualties yet to be ascertained, the police station and barracks burnt. The attack left a devastating little town of Garkida. News from sources in the village says the insurgents came in about nine truckloads of their men and more than 50 motorcycles carrying at the least, two persons.

“The saddest part is that some people from the very town of Garkida who were recruited by the insurgents were the ones selectively showing the insurgents which properties to set ablaze. My heart bleeds for this nation we call Nigeria.”

Also, the Cavell Group, a consultant in intelligence, risk, crisis and expedition, in a series of tweets via @TCG_CrisisRisks, noted that many of the villagers were able to escape into the bush while some were abducted.

The tweet added, “A group with hostages left in a large convoy in the North-East towards Borno. There was still sporadic fighting well after midnight. ISWAP (has) now claimed responsibility with claims they killed three soldiers. No word on hostages. At least two soldiers confirmed killed and three Christians were taken from a church. However, many more reported taken. Significant damage to town, hospital and police barracks.”

It was also gathered that there was a military aircraft that flew in the airspace but that it wasn’t seen firing any shots.

According to sources in the community, a military contingent used to be in the town and nearby villages but was withdrawn recently leaving a small contingent of soldiers.