Some victims of Fulani herdsmen attacks in Edo state including those kidnapped have recounted their sad ordeals. 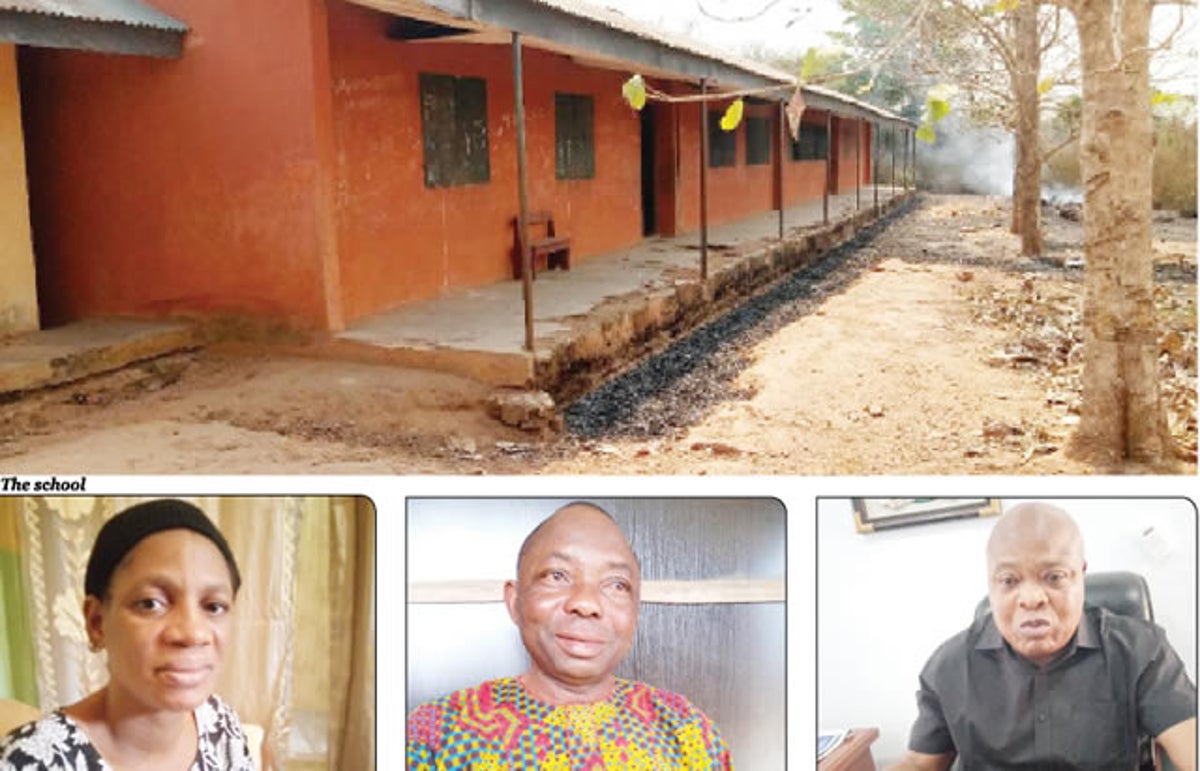 Obi Primary School located in Uzebba Ihuleha community in the Owan West Local Government Area of Edo State like many schools resumed for academic activities after the first-term holiday which ushered in Christmas and New Year holidays.

The school founded in 1958 had eight teachers residing in Obi camp in the area. It’s sited in a border forest between Edo and Kogi states.

But the school’s Headmaster who is also the Chairman, Nigerian Union of Teachers, Owan West LGA chapter, Mr Okun Dada, and other teachers, have abandoned the school despite their contributions to its development. An abduction case they witnessed last month made them to take the decision.

Dada told Sunday PUNCH, “Nothing can take me back to that place. If the government cannot transfer me, then they should pay me my entitlements and I will retire.”

On January 13, 2020, Fulani gunmen invaded the school when the teachers just ended the first meeting for the year. Dada said five of them were in the staff room while three were around his office that day.

He said, “There was no pupil in the school that day being the first day of resumption. Usually, it used to take one to two weeks before pupils start coming because of the distance of the school to the communities. One of the three teachers sitting outside my office was Mrs Esther Alabi. She was kidnapped by the gunmen.

“It was around 10:30am and suddenly I saw one of my teachers running. He ran across where I was sitting. Then I looked up and saw one of the gunmen shooting and everybody ran for safety. I managed to jump the window and fell into the bush not knowing that they had already surrounded the bush. They attacked me with a matchet and while I was still struggling to escape from them, I fell.

“One of them pointed a gun at me and I begged, ‘Please don’t kill me’ but the gun refused to fire. When they noticed that the gun didn’t fire, the man who held the gun tried to remove the bayonet. While he was struggling to do that, I ran towards my car. Others ran after me but I had already entered the vehicle and zoomed off to a nearby police station.”

But Alabi was not lucky even though she jumped through the window, she fell into the hands of the gunmen who took her away with them. Our correspondent gathered that the teacher was the only one seized by the gunmen and was with them for three nights moving round the bush.

She was released on the third day after a payment of N1.7m ransom and purchase of items like cigarettes, malts and soft drinks, among other things.

Alabi, a mother of two, had been teaching in the school for five years. Before the incident, the woman enjoyed good health but now on drugs for insomnia which became worse especially in the night arising from nightmare of the incident.

The teacher said, “We were in school that morning on the first day of resumption. We did normal sanitation in the school because the pupils had not resumed. We went to the camps to tell the parents of the pupils that school had opened and they promised that to let them come. I was in the headmaster’s office and he was making calls beside me when suddenly we heard shooting. That was how we started running. Three of us were together; myself, headmaster and one other teacher who uses a walking stick. I saw him trying to escape but he could not run. I also struggled to run. I managed to climb the window of my class but I fell, that was where two men met me and pointed guns on my head.’’

Alabi stated that they threatened to shoot her if she moved while one of them dragged her away.

She added, “I tried to escape but he caught up with me and shot at the ground to scare me. Then I saw others coming to us; they were six. I was with them in the forest without food or water for three days. Luckily for me, I was not raped but I was beaten. While I was with them, they asked me questions. They asked if I was aware of kidnapping, I said we have heard of it in other places but not around our community. They said I had heard of it yet still came to school. I told them that it was my place of work and I had no choice but to go there. They said their business was to kidnap for ransom and kill their victims if ransom wasn’t paid.’’

Alabi said she became frightened at that stage as she thought of where she would get the money to pay ransom.

She further said, “I understand Hausa and tried to get what they were saying but I couldn’t. In my school, herdsmen had taken over one of the classrooms with their cattle. They slept and even cooked there. The headmaster tried all he could to make them leave but they refused to go. Sometimes, we met them sleeping in the classes.

“Their cows grazed on the farms owned by us. They harvested yams and cooked them inside one of the classrooms. That was when we started nursing fears that they could attack us anytime. After closing, we would meet them there the following day. They usually occupied two classes.”

The teacher said immediately she was kidnapped, her phone which she was charging in the headmaster’s office was taken, adding that they searched through the mobile and found her brother’s number, Nelson Asenhame, whom they contacted the following day.

Speaking with Sunday PUNCH, Asenhame said he was in his office along Ifon road when someone told him that there was a kidnapping case at the school.

He said, “I know my sister teaches there. The moment I heard about it, I reached out to reach her via her mobile but it was not connecting.’’

Asenhame said he became apprehensive at that point and immediately stopped a motorcycle to take him to the school.

He stated, “While on the way, I noticed movement of people to the school. I stopped to ask them what was happening. I was told that suspected herdsmen came to kidnap teachers in the school. I became worried and told the motorcyclist to move ahead. On getting to the school, I met police and vigilantes there. I also saw some of the female teachers outside. Of course, the way they looked showed they escaped. Their bodies and clothes were dirty. They also had no shoes on. When they saw me, they asked for my sister, I told them I had not seen her. I was sad when one of them told me she overheard my sister begging the kidnappers and crying as they took her away. Later on, some of the teachers started coming out from hiding and I was hoping that she would be out too.

“One of the teachers was sending text messages from his hiding place but he would switch off his phone once the message was sent and we began to suspect that probably it was the kidnappers’ prank. He begged to be rescued from where he was. Later, the policemen came from Auchi and went to where he described and brought him out. Then it remained my sister and one other teacher who were not seen. Later in the day, the teacher came to the station. By that time, it dawned on me that my sister had been taken away because her mobile was off.’’

Asenhame told Sunday PUNCH that there was no communication about his sister until 9pm when his phone rang and he could hear his sister’s voice at the background begging the kidnappers for freedom.

“Someone spoke with me on the phone that I should look for money to secure her freedom. He first said N30m and I said being a teacher she couldn’t get such money. Later, they reduced it to N15m. I was careful in responding because I didn’t want to say anything that would provoke them and jeopardise my sister’s life. I also didn’t want to negotiate so I started begging him. He shouted at me and switched off the phone,” he stated.

He told our correspondent that there was no word from them after the first call until the following day.

Asenhame added, “They monitored all her calls so I had to start calling people to stop calling her mobile because whenever they called, they would say ‘She has plenty people, tell them to bring money.’ Later on, the negotiation was taken over by one of her friends as the family started running around for money to pay the ransom. They later changed their mind when they heard that her mother was on admission in hospital and her brother had an accident. They reduced the money to N10m. After sometime, they told us to bring whatever we had. By this time, police, soldiers, vigilantes, hunters and youths were already combing the forest in search of her.

“She told us that each time they noticed that the search party was inching close to them, they would move farther into the forest. On the third day, they called us to bring whatever we had along with malt, soft drinks, water, and rizla. They instructed us not to come in a car but motorcycle. We bought what they demanded and went to them with N1.7m. It was around 1 am that we received a call that she was already at the chairman’s house.”

On his part, Vice Chairman of Owan West LG, Mr Moses Maya, described the incident as a shock to the council area.

Maya said, “When we heard the news, the chairman rushed to the scene immediately to find out what happened. At the end of the day, we found out that it was true that one of the teachers was kidnapped.” He said the incident was the second in the council area.

He added, In the first incident, “After five days, the victim was released. He is a lawyer. He came with his family to thank the chairman. I know money was paid but I cannot say precisely how much. You know people tend to be careful with such thing.  When the lawyer was released, he said his abductors were Fulani.”

Sunday PUNCH gathered that immediately Alabi was released by her abductors, she was taken to the hospital for medical checkup but she said her sleep had not been regular since then.

When contacted, the spokesman for the state police command, Mr Chidi Nwabuzor, promised to reach out to the divisional police officer in Owan West and get back to our correspondent with his reaction.

He didn’t pick subsequent calls to his mobile and had yet to get back to our correspondent as of the time of filing this report.