A video has currently surfaced online of AMCON officials taking over Buba Galadima's house after a court order. 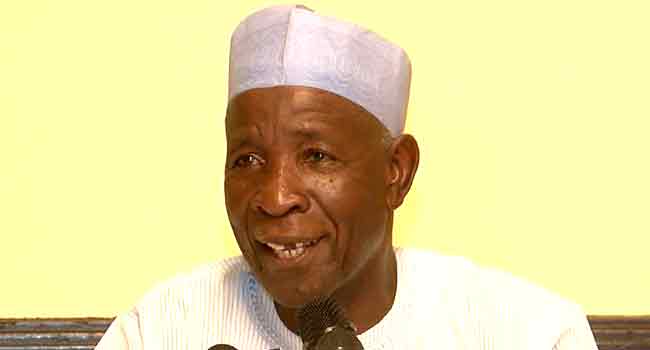 A video which has gone viral online captured moment officials of Asset Management Corporation of Nigeria (AMCON) took over the Abuja home of Buba Galadima, a strong critic and former ally of President Muhammadu Buhari.

Asides losing his houses at No. 15 Addis Ababa Crescent, Wuse Zone 4 in Abuja, and No. 4, Bangui Street, Wuse 2 in the FCT following an order given by Justice A.I. Chikere, he also lost his company Bedko Nigeria Limited to AMCON over a chronic debt of N900million.

It was gathered that Bedko Nigeria Limited and Buba Galadima owe AMCON about N900m through a loan purchased during the first phase of Eligible Bank Assets (EBAs) from Unity Bank Plc in 2011.

Commenting on the take over, spokesperson of AMCON Jude Nwauzor said;

"AMCON has offered the obligor a good measure of olive branches and explored all avenues to resolve the matter amicably. But the obligor, and his company, Bedko Nigeria Limited, have remained recalcitrant and unwilling to repay the huge debt to the Corporation."

He further disclosed that AMCON would take all necessary actions, including asset take-over, liquidation, winding-up and garnishee proceedings against Bedko Nigeria Limited and its directors in line with the court judgment and relevant sections of the AMCON Act as amended".

On his own part, Buba Galadima denied being indebted to the federal agency. He said;

“I went to a bank in 2003 to sign for a loan. A letter of credit was opened for me to import fertilizer at that time. But the goods never came. The head office of the bank in America refused to honour the invitation because the Bank in question was under investigation by the FBI (Federal Bureau of Intelligence). I didn’t take one kobo from them. They didn’t even credit my own account".

He alleged that after AMCON sued him, he appealed against the federal high court judgement which he said he was not satisfied with. Galadima revealed that he won the appeal and was freed by the Court of Appeal.

“All this is an attempt to disgrace and break me down. But I am unbreakable and they can never silence me.

“They will surely pay for disgracing and humiliating me publicly. I am going back to court.”

Buba Galadima was one of the nine signatories that signed the merger agreement between some political parties that came together to form the ruling All Progressive Congress (APC), which President Buhari used as a platform for his election in 2015.

He is the former Director-General of the Nigeria Maritime Agency (NMA) (1996 – 1998), and was appointed the National Secretary of the Congress for Progressive Change (CPC) formed in the run-up to the 2011 national elections.

Here are videos from the scene below;