A petrol station has been gutted by a huge fire in the Federal Capital Territory causing a serious stir. 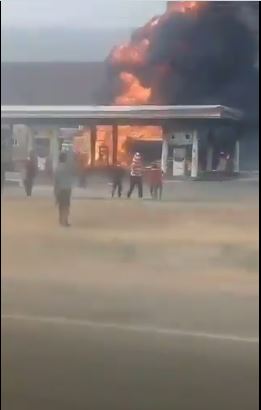 A filling station in Abuja, (Shema Mega Petrol Filling Station) has been gutted by fire.

Located along Kubwa Expressway, the filling station went up in flames on Wednesday, destroying a building that houses its offices.

According to eyewitnesses, the fire started when fuel spilled across the premises from a tanker that was offloading.

Although there were no casualties, at least six petrol rigs and a tanker were destroyed by the fire.

At the time of reporting the incident, men of the Federal Fire Service were on ground to quench the fire.