A kidnap kingpin who escaped from DSS custody has been re-arrested by the men of the Nigeria Police Force. 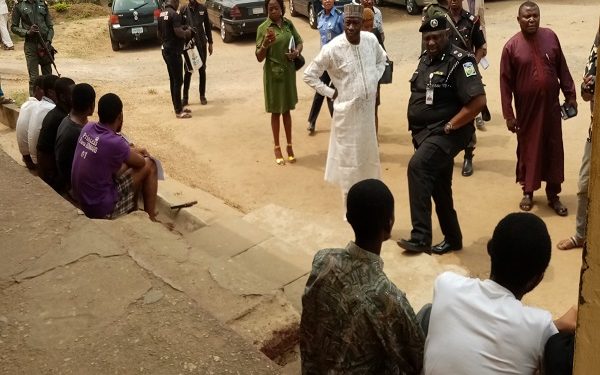 According to a report by The Nation, the Police Command in Cross River State on Thursday paraded 9 suspects before newsmen, among them is “one Raphael Nwanakwo Sam ‘M’ who is an alleged serial kidnap kingpin who escape from the DSS custody sometime in 2018 while he was under investigation”.

He was re-arrested on 20th February 2020 by men of the State Police command, Commissioner of Police in the State, Nkereuem Akpan said.

The Commissioner of Police who spoke on recent achievements of his command in combating crime in the State paraded a total of 9 suspects including the alleged kidnap kingpin with four others for the crime of kidnapping and four on the crime of robbery.

Asked if the alleged kidnap kingpin paraded was the same as one of his officers recently arrested by the army along with four other suspects for kidnapping, the said no but confirmed that a Police sergeant attached to the Zone Six Command is in custody of the Military undergoing interrogation in connection with cases of kidnapping.

He revealed that the alleged kingpin in their custody is helping with information and that investigation is ongoing. Adding that the public should be conscious of the new trend use as tactics by kidnappers; “what there are doing now is that, they hit your car from behind and you will think its an ordinary accident but the intention is to get you to park your car and come out. If it is in a convenient place for them, as you step down from your car, you will be kidnapped. If the place is not good for them, they will assess you and begin to trail you. They can hit you the first time; no response, they will follow you, trace you and profile you. When you step out of your car, they want to profile you to know if you are a big fish for them to catch. The public should guide against that. It’s the new trend. If a car hits you, make sure it is a safe area before you stop to check your car. If not, continue your journey until you get to a safe place. Sometimes they can flag you down and tell you your tire is down, so you can stop and come out to check.”

CP Akpan said the Police have been having top-level security meeting with other security agencies in the state on combating crime and very soon new measures will be implemented and the Public will notice it.

When interviewed by newsmen, the suspect paraded as the alleged kingpin of kidnappers, Raphael Sam argued that one of his friends who is wanted by the Police is the actual kidnapper and since he knew his friend who is still at large is into kidnapping, he dissociated from him but the Police arrested him when they could not get his friend.

Another of the suspect paraded gave his name as Lawrence Ibiam Ebri from Yakurr Local Government Area of Cross River and denied involved for what he is accused of. His words, “my little cousin who was close to me got missing so the father, who is my uncle concluded that since his missing child is close to me, I am the one responsible for his disappearance. He petitioned the Police and they arrested me since 18th of December 2019 and until this February ending 2020 they say the investigation is going on and they have tracked my calls, I have never done anything like that because he is my cousin and also my blood. They are not telling me anything and I am a student in the University of Calabar, Final year, Medical Leb and this has affected my education. They have kept me in detention since December till now for what I have not done nor know anything about”.

Among those paraded on the case of robbery as suspects are two brothers, Daniel Edu Nkanu and David Edu Nkanu.

According to the Police on 31st of January 2020, at about 21.10 hours, one Mary George Ojah of Scanobo Extention, Ikot Ene-Obong, eight miles Calabar, Cross River State, reported at Special Anti-Robbery Squad (SARS) that a gang of armed men attacked her at the above address and robbed her, also inflicted injuries on her with matchet cut on both hands and made away with her belongings. The suspects were eventually arrested and items recovered from them included one Techo Ipad, one Z-Pad, one Tecno phone and one wristwatch.