A notorious area in Lagos where women of easy virtue ply their trade has been exposed in this report. 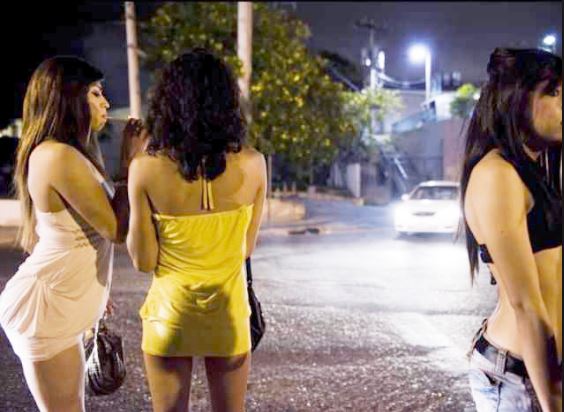 Women of easy virtue
A visit to a notorious jungle, known as Agbole in Ejigbo area of Lagos, may have exposed that some part of the metropolitan city may still be described as modern day Sodom and Gomorrah, where drugs and prostitution strive daily, popularly known as bend down for short sex at affordable prices.
P.M.EXPRESS reports that the Lagos State Commissioner of Police, Mr. Hakeem Odumosu, may have declared war on the women and men of easy virtue including drug dealers through the Police operatives at Ejigbo Division led by the DPO, CSP Olabisi Okuwobi, in order to curb criminal activities in the area which had reduced with recent efforts.
There is no doubt that crimes have reduced in Ejigbo and its environs but what the Police may have to really control is the bane of prostitution by old women, single mothers, ladies, widows and teenagers including men who are into one of the oldest trades – prostitution.
Ejigbo can be seen as a calm backwater suburb in Lagos. It is a rugged terrain without good roads and houses built without proper planning or layout. It paints a picture of a forgotten land, where only people with low income do their best to live since rents there may easily be affordable with the increasing high birth rate.
The place is calm today unlike in the past, thanks to the DPO, CSP Okuwobi and her team, who have worked tirelessly to bring sanity to the area but that does not mean that anti-social behaviours are still not rife in the area.
P.M.EXPRESS had followed a lead about a closed street in Lafenwa area, where prostitution is the main business.
On getting to the place popularly known as ‘Agbole’, it was not different from any beer parlour district across the state. Long queues of commercial motorcycles were were along the unpaved roads while the owners were in different joints that dotted the streets.
There are several brothels built with planks, where sex workers hang around at night for short sex coupled with drug dealers who sell various drugs to clients who usually go there to patronize sex workers both men and women.
Aside from the large number of people who turned out at night, there were other noticeable figures lying in the shadows of the dim lights area; ladies of all shapes and sizes were all over, married women and men who dress like women.
P.M.EXPRESS reporter, who took a seat and ordered a bottle of beer, thought the girls would soon flock to him to advertise their ‘wares’ but none of them approached him. It seemed there was a laid down mode of operation; some men, who are pimps, reach out to the ‘customers’.
In a matter of minutes, one of them sat beside the reporter and asked if he wanted a girl and what kind of girl he was interested in. After turning down such offers from two other pimps, another one walked up to him and asked a very peculiar question, “Do you want a man?”
That gave credence to the reports we had received about the area. It was said that there were young homosexuals, who are also prostitutes in the area.
There were talks that many of them lurked behind the curtains of darkness while plying the trade alongside their female counterparts.
One of the patrons of Agbole, Mr. Bright, gave our reporter the scoop and explained the workings and uniqueness of ‘the jungle’ as he called the place.
According to him, Agbole is a necessity. He also confirmed that there were such activities going on there.
“It’s not only the girls who are hungry, so are men. Some of the boys are not even gay; they are just doing it for the money” he said.
He also said that the boys operate higher tariff rate than the girls since they get fewer customers.
Bright explained that both the male and female prostitutes engage in various kinds of sexual activities. MouthAction, according to him, is more common, as the backs of the sheds used are not very conducive for regular sex.
Asked about the risk of contracting diseases, Bright said it was not common since they have local drugs they use with alcohol.
“There are native doctors in Agbole, who prepare concoctions which the patrons usually drink. They call it washing and setting and it clears all infections” Bright said.
At the scene, one can see men one after the other leaving their seats to the back of shed where the women of the night were. Our reporter tried to chat up one of the ladies to know more about her trade but she simply pointed to her love-vendor, who was sitting at a corner smoking what appeared to be Indian hemp.
It was also gathered that part of what the shanty brothels at Agbole do include keeping guns, charms and other dangerous weapons including exhibits of loot by armed robbers after operations.
The Local Government authorities may not have really taken any decisive step on the jungle called Agbole owing to what was described as compelling factors due to the influence of the owners of the area.
Indeed, Agbole is a jungle that have ruined the youths and families which those in authority need to focus attention on.
Culled from PM Express
Top Stories