Labourers By Day, Burglars By Night: See The Gang That Make Millions Stealing At Construction Sites


The story has been told of the 5-man gang that rake in several millions stealing at construction sites. 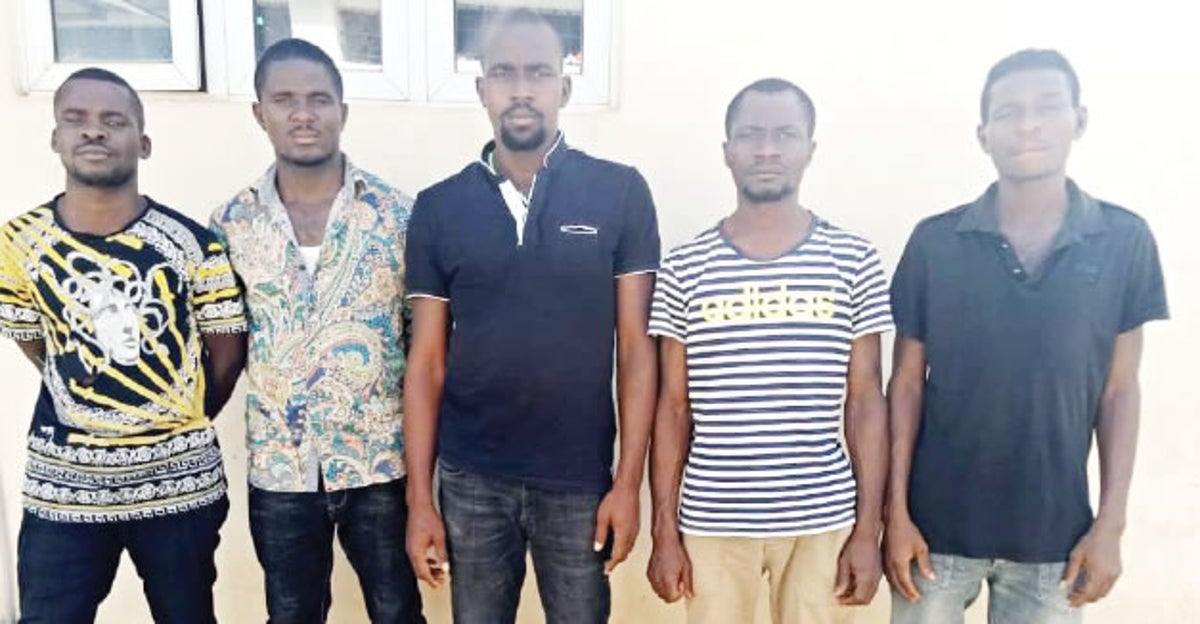 With his calm looks, Emeka Emmanuel would easily pass for an innocent Nigerian dutifully doing his daily job and content with his little income.

Popularly known as Wiper, Emmanuel paraded himself as a labourer ready to work on any construction sites in the Federal Capital Territory, Abuja. His zeal appeared genuine enough to land him contracts at Guzape and Gwarimpa areas of the FCT.

To many of his clients, the 34-year-old was an artisan, adept at installing plaster of paris. They never knew the man they entrusted their property with during the day had a criminal role he assumed at night.

Emmanuel’s dark side came to light during the week when he was paraded by the police for stealing coils of electric wires worth N10m. He was arrested alongside five other accomplices, Chidi Offor, Kalu Chukwu, Ikechukwu Udeji, Chijioke Igwe and Jabi James, who is also an artisan.

Operatives of the Inspector-General of Police Intelligence Response Team launched a manhunt for the gang after a property owner at Guzape reported that to the police that the wires he kept at his site were stolen.

Saturday PUNCH learnt that in the course of their investigation, detectives traced the theft to James who had reportedly gone to some sites in Guzape some days earlier in search of jobs.

He was consequently tracked down and gave police information leading to the arrest of the gang leader, Emmanuel, and other members of the gang.

A police source told our correspondent that James contacted Emmanuel after sighting the wires on one of the sites he visited and the gang struck at night, carting away the property they later sold for N1.2m.

The source said, “The gang specialised in burgling construction sites in Abuja. They were rounded up recently after they looted a site at Guzape, stealing cables worth over N10m. The gang had been terrorising residents of the FCT for a long time but they ran into trouble recently when the owner of the building at Guzape reported their activities to the police.

“One of the gang members known as James, who fixes burglary, went to one of the sites at Guzape in search of jobs. He discovered there were several coils of cables on the site. Afterwards, he contacted Wiper, who is the leader of the gang and informed him of his discovery.

“Five other members of the gang were also brought in and they struck at night. They carted away the cables in a truck and sold them to their waiting buyers at Jabi Market in Abuja, at a giveaway price of N1.2m.”

The source explained further that after the theft, the case was reported at the Abuja of office of the IRT and operatives were deployed in the scene for on-the-spot investigation.

“Workers found on the site were interrogated but it was discovered that one of the persons who had come to look for job there might have organised the theft.

“The suspect was trailed and arrested and during interrogations he confessed organising the theft and led the operatives in arresting members of his gang including their buyers,” he added.

Narrating his criminal escapades, Emmanuel, the gang leader, said there were times he stole wires when he was at work and he would hide them in his bag.

He said he operated in four sites within Abuja, adding that he sold the stolen items at Jabi and Gudu markets to three dealers still at large.

He stated, “I started installation of POP in 2016. Before then, I was a trader. I sold spare parts in Zuba Market. The owner of the shop I used wanted to sell it but I could not afford to buy it. So he told us to vacate the place.

“I then went to learn how to install POP and one of my friends known as Osors, taught me how to steal at construction sites. Osors is dead now. What we target mostly are wires because we can hide them in our work bags.

“I used to carry coils of wires in my bag and would take them to Jabi and Gudu markets to sell them to Uche, Utekebe and Ubaka. I started this in 2017 and I have done it about four times.

“It was James who brought the job that got us into trouble. He told me that he went to a site at Guzape to look for jobs and when he got there, he discovered that there were plenty wires in the compound. James then called me because he knew I also steal them.”

Emmanuel said he invited other members of the gang, including Chidi and Kalu to take part in the operation.

He, however, said it was James who invited Igwe, adding that he got N300,000 share from the sale of the items.

“We  stole all the wires we found in the house.  We sold the wires at a giveaway price to Utekebe for N1.2m.

My share was N300,000 and every other members shared the remaining money,” he added.

Apart from being an expert in POP installation and painting of buildings, Ofor, another suspect, was good at stealing. In work and crime, he was almost on the same level with Emmanuel.

The 34-year-old man stated that he had operated on three sites so far, adding that he got N300,000 share in the Guzape operation that led to their arrest.

He said, “I am into POP installation and painting but I reside in Gwagwar area of Abuja. It was my elder brother who taught me how to steal from construction sites. I met Wiper, who does the same job as me and we started working together. We started by stealing wires from sites because they are easy to carry.

“I have stolen from three sites, one in Gwarimpa. I stole over 20 coils of wires from the site and I used to take them to market and sold to one Utekebe.

It was my friend Emeka (Emmanuel) who took me to do the job at Guzape, and we stole all the cables we found on the site.

“I got N300, 000 share. We also stole from another house in Guzape and I also got N300, 000 as my share. I used it to solve my family problems. I paid house rent, bought clothes and fed myself with the rest.”