Mr Oshiomhole told journalists Thursday he had no way of knowing the president's perception of him. 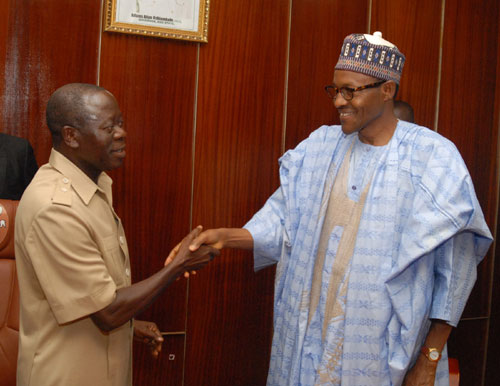 According to Premium Times, the national chairman of the ruling All Progressives Congress, Adams Oshiomhole, has played down the possibility of President Muhammadu Buhari not being satisfied with his leadership.

Mr Oshiomhole told journalists Thursday he had no way of knowing the president’s perception of him, as he could not “read him.”

The APC leader said this as the party faces a fresh crisis that saw Mr Oshiomhole suspended by a court on Wednesday, with some party leaders backing the decision.

However, Justice Danlami Senchi of the federal court in Kano on Thursday countered the ruling, putting Mr Oshiomhole in place.

Reacting to his suspension and the plot to secure his removal, Mr Oshiomhole told journalists shortly after his meeting with President Buhari at the State House that those after him were doing so because of their 2023 presidential ambition.

“But there are other forces that see me for whatever reason as a threat to them. And those leading this anti-Oshiomhole campaign, some of them I emphasise, cannot even boost of a councillor in their state even as they lay claim to leadership position in our party,” he said.

President Buhari has beer silent on the matter.

When quizzed on whether the president was in support of his approach in managing the affairs of the party, Mr Oshiomhole made no pretense about enjoying presidential affection.

“Now, you want me to read him, I will decline. If you are in doubt, you are so privileged here that you can ask the president: comfortable or uncomfortable,” he said.

“I am not a comfort reader, what I have done I have explained to you, that much I know is the truth. As for questions that have to do with inner feelings, those you can confirm if you are in doubt.”

Can You Get Coronavirus From Sex? See What Nigeria's Health Minister Revealed
Popular Stories