A secondary school student has reportedly died after she was allegedly flogged by her teacher. 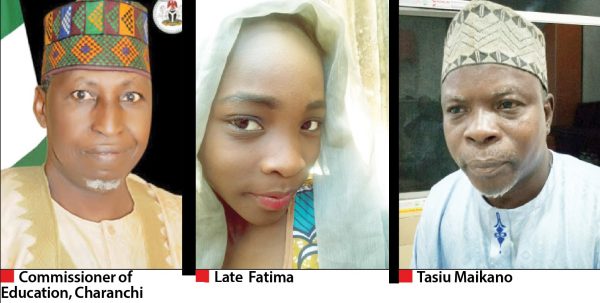 “My family is still in shock, and mourning the death of our daughter Fatima. She was such a lovely kid who loves taking care of her younger ones. Her dream was to become a teacher,” says Malam Tasi’u Maikano, the father of late Fatima – a SS2 student of Government Girls Arabic Secondary school Fago.

Fatima’s dream was cut short following her death a forthnight ago purportedly from a corporal punishment by a mathematics teacher, one Abubakar Suleiman.

Daily Trust Saturday gathered that the maths teacher, also known as Sikiti, was not a full-time teacher or casual staff but was engaged through a private arrangement by the principal of the school for a monthly stipend of N5,000.

While narrating the incident that led to his daughter’s death, Maikano who resides in Kofar Bai in Katsina town said he was called by one of the vice principals of the school on February 13 to come to the school because Fatima wasn’t feeling fine.

Maikano arranged with some relatives and embarked on the 2-hour journey to the school. On getting there, he was informed that Fatima’s health condition worsened when she fell down after an evening bath. They said she may have been hit by evil spirits.

On seeing his daughter, he shelved his earlier decision of taking her back to Katsina for medical care and drove straight to Daura General Hospital which was less than 15 minutes drive from the school. No sooner had they arrived, than the doctor on duty confirmed her dead.

Maikano called the vice principal to inform him of what had happened and took the long ride back to Katsina town to begin her funeral rights and burial the next day, February 14.

Four days after her burial, Maikano said he asked for his late daughter’s school bag and books. While going through them, he came across a diary which the students refer to as ‘slum book’ where they sometimes document their daily activities.

In the last page, the late Fatima had written in Hausa “Allah Sarki ranar Alhamis munzo firef akaci miyi lilin muka yi malam Abu sikitu ya bugimu har ya fasni ko ma goshi banda lafia ina masassara da ciwon baya kamar na mutu” which translates in English as “God is great. On Thursday at prep, we were asked to kneel down. Abu Sikiti beat us and I got wounded, I’m down with fever and my back aches like I’m dying.”

Speaking with Daily Trust Saturday, the deceased’s father said “When I came across this note, I became confused and called the vice principal and told him about it.

“When I didn’t hear from him after 15 minutes, I decided to go to the school with some of my relatives. He later called but I refused to pick it until we got to the school.

“On our way to the school, one of Fatima’s friends called me to find out how she was doing and I told her she’s dead. I heard her and the others burst into tears. I was shocked to learn that no one heard of her death.

“When we got to the school, I showed them what she recorded on her ‘slum book’ and the principal later arranged some students who came and narrated that Fatima came out of the toilet, collapsed and fell sick thereafter.

“However, one of her classmates later told the gathering how the math teacher flogged them for not doing their homework, and when it got to Fatima’s turn, she begged not to be flogged on her back but hands,” he said.

Maikano said “What annoyed me was the principal and the teacher’s move to cover up what really happened. My family is pained because of that.  Another thing was the school authority not doing enough during her sickness. Records show she wasn’t even taken to the school’s dispensary or Fago Town hospital or to Daura for proper medical attention.

“More painful was their inability to come and condole with us during the funeral. The vice principal came four days after on his way to Dutsinma while the principal sent a message that she will come next week. Even her friends were not told she’s dead.”

The family reported the matter to the state ministry of education and all parties were summoned for a meeting.

The embattled teacher Abubakar during the meeting admitted flogging all the students who did not do their home work.

“When I came to flog her, she told me that I can only flog her on her palms which I did. This is all I know.

Speaking on the matter, the principal – Fatima Yakubu, attributed her inability to visit the bereaved family to ill health.

For Maikano, what has happened has happened and no action will bring his daughter back to life but he says action must be taken to serve as deterrent to officials who do not take proper care of children and wards entrusted in their care.

All efforts to get the reaction of the state commissioner of Education, Dr Badamasi Charanchi, proved abortive as he neither answered his calls nor responded to a text message sent enquiring about government’s action on the matter.

However, sources within the ministry confirmed to our reporter that the embattled principal has been officially queried for negligence and redeployed back to the ministry.