The woman and her lover whose names could not be immediately ascertained, were said to have taken a s*x enhancement drug during the exercise. 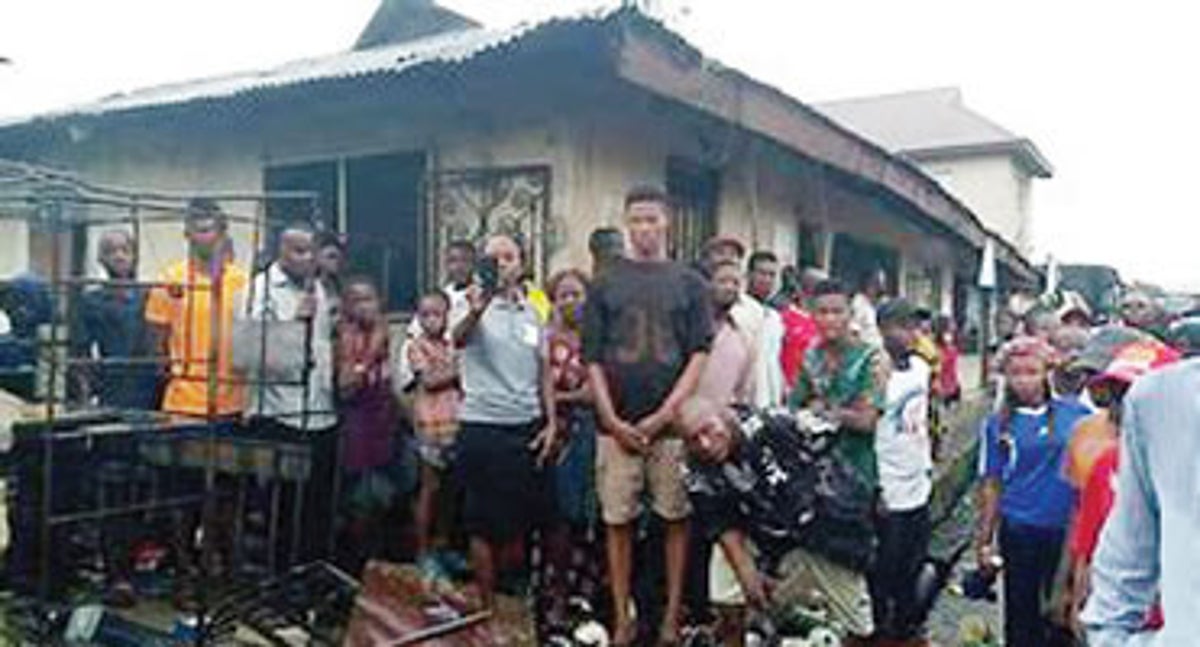 Some residents of Elechi

According to a report by Sunday Punch, an unidentified 29-year-old woman has died during an alleged sex romp with an unnamed 31-year-old lover who also became unconscious after the act.

The lovebirds, whose names could not be immediately ascertained, were said to have taken a sex enhancement drug during the exercise.

Sunday Punch reports that the incident which happened at Elechi by Wobo Street shocked other occupants of the one-storey building.

Residents became curious when the duo did not come out from the apartment on Monday morning. The residents and the police invited to the scene later forced the door open and discovered the lifeless body of the young woman and her unconscious lover.

A resident, identified only as Dira said, “The young woman came over on Sunday. The man was to marry the woman because they had done introduction.

“The young man recently graduated after being an apprentice for some years. The woman visited him at his residence on Sunday and slept over. But on Monday, they did not come out at daybreak.

“They (neighbours) later broke the man’s door, only for them to discover that the young woman was dead, while the man was unconscious. They were both naked. The young man was unconscious while his manhood was still erect. With the help of the police, the neighbours evacuated the young woman body to the mortuary, while the man was rushed to an undisclosed hospital. The neighbours that broke the room saw some drugs suspected to be sex enhancement drugs.”

Head of a vigilance group in the area, Godstime Ihunwo, said the man was recuperating in the hospital, even though he had not been able to speak.

He said, “We reported at Nkpolu Divisional Police Headquarters and with the assistance of the police, we forced the door open. As we broke the door, we saw the young woman lying on the floor, while the man was on the bed, but motionless. We later noticed that the man’s eyes were blinking and he was breathing slowly.

“We brought the man out and noticed that he had already defecated in his boxers; there was a wound on his left hand as if he hit his hand on a wall while struggling. But the young woman was on the floor with a head injury as if she hit her head on the tiles. She appeared to have tried to put on her pants before she died. Her pants were on her laps.

“One of her eyes bulged out while the other was closed. Her tongue was black and filled her mouth. Her neck region and private parts were swollen. We rushed the man to the hospital. We learnt he is responding to treatment, but he has not spoken yet. The doctor treating the man confirmed that he used drugs.

“The young woman told her parents she was attending a vigil on Friday. The mother of the man is aware of their relationship. ”

The state Police Public Relations Officer, Mr. Nnamdi Omoni, said the man had recovered but with the State Criminal Investigation Department to explain the circumstance that led to her lover’s death.

Omoni did not give the names of the lovers but promised to inform members of the public of any development concerning the matter.