Why Sanusi's Dethronement And Banishment Is Illegal - Falana Blows Hot


Femi Falana made his opinions known on Tuesday during an interview on Channels TV's Politics Today. 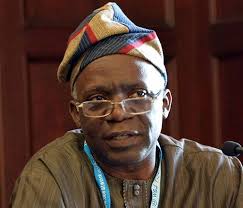 Femi Falana, a Senior Advocate of Nigeria, has described the dethronement and banishment of the Muhammadu Sanusi (II), as illegal.

He said this on Tuesday during an interview on Channels TV’s Politics Today.

“The dethronement, the Banishment and restriction of movement and detention are all clearly illegal.

According to him, the emir was dethroned without being given any opportunity to defend himself.

“As if such violation of his freedom and right to fair hearing was not enough, the governor was alleged to have ordered his arrest and banishment to his village in Nasarawa State,” Falana added.

When asked if he (Sanusi) has the legal grounds to challenge the dethronement, Falana said, “for sure”.

Meanwhile, Sanusi’s Lawyers have already threatened to take legal action if the state authorities don’t release him within the next 24 hours.

The lawyers made this known during a press briefing on Tuesday in Abuja while the emir was being moved from Loko Development Area of Nasarawa State to Awe Local Government Area.