Nigerians have taken to social media to condemn the assault of a photographer by Kwam1 during his performance. 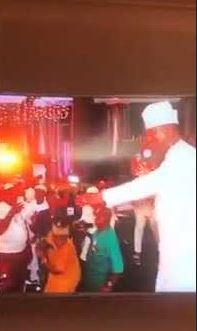 Fuji maestro, Wasiu Anifowoshe Ayinde Marshall (KWAM 1), the Mayegun of Yoruba land has stirred reactions from social media users after a video of an incident involving him at an event surfaced online.

Also known as K1 De Ultimate, the 63-year-old musician was caught on camera slapping a photographer on the head during his performance at socialite Ibrahim Dende Egungbohun, a.k.a IBD Dende’s birthday party on Sunday in Lagos.

In the video currently trending on social media, the fuji musician slapped the photographer hard as he tried to take a photo of other guests at the party.

Nigerians have taken to social media to react to the video. Some find it hilarious but the majority is condemning the act.

Thatketomumo wrote: “That was uncalled for, hitting someone just because he was trying to get a shot at what he was probably paid to be there for. These people should remember their last days o, never his fan”

ANkarafreak wrote: ” That’s rubbish how would u hit someone on his head like that because u are mayegun “