Details of Oshiomhole's appeal court case which took place today has been revealed. 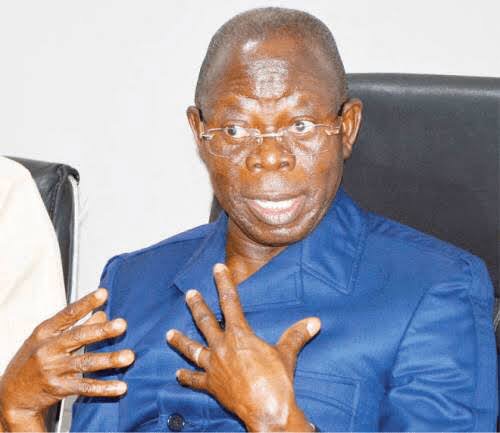 Adams Oshiomhole
The appeal court has said it will not give a ruling concerning an appeal filed by Adams Oshiomhole today against the judgment of a federal capital territory (FCT) high court suspending him as the national chairman of the All Progressives Congress (APC).
The court said it has suspended hearing on the matter.
It was gathered that the court had scheduled Monday to hear the matter, but a three-man panel of justices rose at a session today to say a new panel would be constituted to hear the appeal.
The APC scheduled its national executive council (NEC) meeting for Tuesday.
Oshiomhole, his supporters and team of lawyers arrived at the court before 9 am awaiting the panel.
Stephen Adah, who led the panel to preside over another case, said another panel would be constituted to hear Oshiomhole’s appeal.
But a clerk of the court later announced that the panel would not hear the appeal of the national chairman on Monday, and that a new date would be communicated to the parties in the matter.
Danlami Senchi, a judge of the federal capital territory (FCT) high court in Abuja on March 4, ordered the suspension of Oshiomhole as national chairman pending the determination of a suit filed by one Oluwale Afolabi.
Senchi said it was wrong of the APC to have kept Oshiomhole as chairman after he was suspended by the Edo state chapter of the party.
But Oshimhole approached the court of appeal seeking a stay of execution of the judgement.
Top Stories