Gravediggers In Jos Reveal The Strange Things That Happen Inside Graveyards


Gravediggers in Jos have spoken up on the strange things that happen inside the graveyards they watch over. 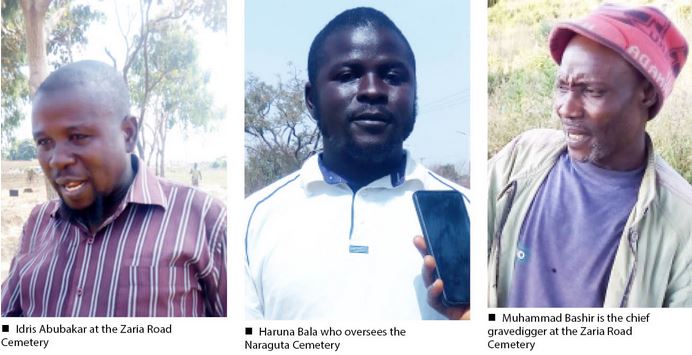 Daily Trust speaks with the brave men guarding Jos cemeteries on what it takes to watch over the dead, their encounter with nefarious grave vandals who insist on disturbing the dead, among other things.

Burial grounds are believed to be the final abode of human remains and is both a humbling and scary place for many people.

This is why grave digging and guarding the dead are jobs not many are inclined to. For Muhammad Bashir, however, it is a way of life. He is a gravedigger and custodian of a section of the Zaria Road Cemetery in Jos, the Plateau State capital.

As Head of the Muslim section of the cemetery, Bashir found himself in the service when his late father, Muhammad Abubakar, called his attention to the great reward in providing such services for the dead.

Now 20 years down the line, Bashir believes what started as an obligation has been worth it and hopes to continue until his own interment.

The Zaria Road Cemetery located around Rock Haven in Jos North,  is over 48 years old and is partitioned into sections for Christians and Muslims.

In his over 20 years as a gravedigger there, Bashir had witnessed a few strange visitors to the place.

“Claiming to be pious visitors, many people visiting cemeteries in the name of offering prayers are filled with surreptitious intent,” he said.

“Some visitors would often  be seen trying to bury talisman and other mysterious objects for ritual purposes. Sometimes, we found talismans around cemeteries that have been brought to be planted by evil people,” he said.

Other than sneaky personalities, others have had the audacity to attempt to bribe the watchmen to permit them to carry out their dubious acts. Some of these figures, Bashir said, would surprise people.

“Others disguise as clerics who visit burial grounds claiming to pray for a loved one but we have ultimately exposed their ill intents,” he said.

One of these encounters, he said, involved three young, wealthy individuals who visited the cemetery some years ago. “They met me with my colleagues and requested to bury a parcel in a grave, a request that was refused,” he said.

The young men insisted on going into the cemetery but when they were refused entry, they offered bribes to the watchmen. What happened next was strange.

“The men then offered us kola-nuts in a plastic bag which we equally turned down but one of them threw the kola-nut at us and ran off and in no time, everywhere was engulfed in a thick smoke and the kola-nut disappeared,” he said.

Just like Bashir, his counterpart, Haruna Bala, at the Naraguta Cemetery in Jos North, also had shocking experiences during visitations to the cemetery.

Situated along Bauchi-Gombe Road, the Naraguta Cemetery has been in use since the ‘70s and was initially for the Naraguta Community.

However, because the Zaria Road burial ground had filled up and is being recycled in the last decade, the Naraguta burial ground became a convenient alternative for the Muslim community in Jos.

One day, during his rounds, Bala discovered a young man digging a corner of a grave, which he claimed belonged to his father. The young man said his stepmother had asked him to bury a ring that had belonged to his late father in the grave.

“I told him that his stepmother should have given the ring to his father while he was alive or placed it on his finger before his corpse was brought to the cemetery,” Bala said. “So, I advised him to take it back to her and tell her that the cemetery custodian has denied him access to carry out her assignment.”

Not only graves have been targeted for fetishes, the watchmen said. The well from which the custodians fetch water to mix sand for burials have also come under focus.

“People would come here and say they have been assigned to fetch water from a well as long as it is in the cemetery, or to get a handful of sand from a new grave even grasses,” Bala said. “We usually send them back because we don’t allow that. We don’t allow evil acts to be carried out in the cemetery. They sometimes even ask for a piece of the shroud used in burying the dead but we have never obliged them because such acts are unIslamic and we believe that whatever you do that is hidden would one day be uncovered and beyond that, the Almighty, will in the hereafter punish you for any wrong doing.”

While still trying to unravel the mystery of the well water, Bala has noticed also attempts to dispose eggshells in the cemetery among other strange acts and requests.

“At a point, someone asked me to allow him collect sand from 99 graves. Others would come with a request to cut a piece of the shroud in which the deceased were buried.”

Following their experiences, Bashir said unlike before, they now subject visitors to inspections at the entrance.

At the Naraguta cemetery, the custodians also said they have ramped up vigilance.

According to Haruna Bala, he became suspicious of certain visitors when sometimes last year, two people interrogated him as to whether he was being paid for his services.

Bala said he informed them that though there was no fixed salary, he sometimes got favours from relatives of the deceased after burials after which the men assured them of some incentives for their services. But the next morning, they were greeted by a surprise.

“My colleague who usually arrives the cemetery earlier than me met the same men with cutlasses and shovels trying to plant a parcel in the grave of a little girl who was buried two days before,” he said.

The Christian cemetery at Zaria Road has witnessed fewer invasions, however and this may not be unconnected to the nature of Christian graves that are often plastered over.

“Based on my 45 years experience at this cemetery, nobody has ever called me to manipulate something for him or to allow him do something evil. But, I know that people are not very sincere and that’s why whenever a visitor comes, we follow him to the particular grave he is going to perform prayers and standby until he is done,” Galadima said.

The standard practice has been to also ask visitors of their intention of coming to the cemetery and to accompany them to any of the graves they intended to visit.

Burying the not so dead

Bashir told Daily Trust that once there was a man who was believed dead, bathed, enshrouded in a white linen cloth and brought to Naraguta for burial.

However as soon as the man was lowered into the grave, his lower limb began to shake and he was eventually removed and returned to the hospital where he eventually died.

That was not the only instance, he recalled.

“Again, 15 years ago, there was a day we received a call notifying us that a man was confirmed dead by doctors in the hospital and we were asked to dig a grave before the body is brought as has been the custom,” he said. “Without any delay, we went ahead and dug and all necessary arrangements for the burial were made to bring him but suddenly, we were later told that the man did not die. The man lived for many years before he eventually died. That was indeed, a touching experience for us all.”

Sometimes, wonders have been uncovered by the gravediggers. For instance, during a recycling exercise to reuse an old grave, an untainted shroud of a person buried decades before was dug up.

Seeing an immaculate shroud in the grave was not a common experience, the gravediggers said.

Idris  Abubakar, who sighted the shroud, said, “One Friday, I was digging a grave and suddenly dug part of a 20-years-old grave where I sighted a body in an immaculate shroud. The shroud was very clean even cleaner than the ones we are seeing today. At first, I was scared but later calmed myself and covered the grave,” he said.

Fortunately, the gravediggers are still busy at work keeping the dead safe from the mischief of the living. That is saying something about the state of the world.