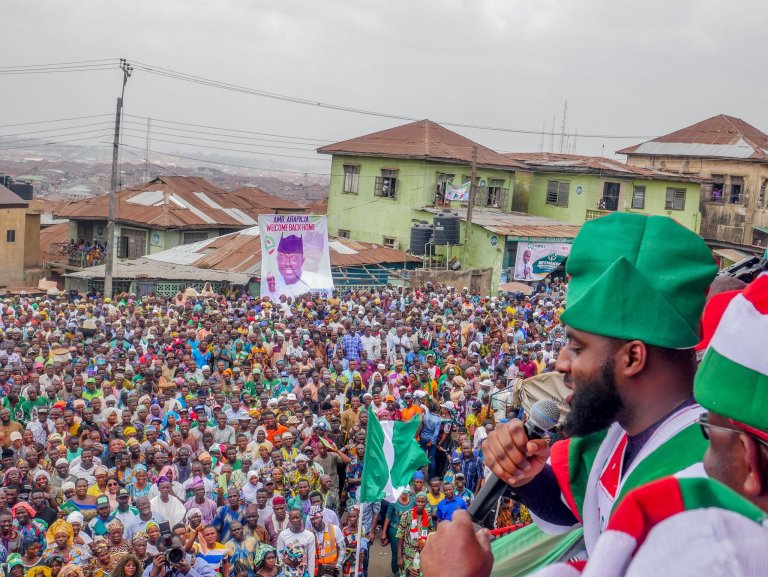 PDP rally
The All Progressives Congress (APC) has condemned opposition party Peoples Democratic Party (PDP) for convening a rally amid the Coronavirus pandemic.
The condemnation came after Governor Seyi Makinde and other PDP Chieftains were photographed at rally on March 18, 2020 amid Coronavirus pandemic after the World Health Organization (WHO) had warned against mass gathering which could aid the quick spread of the deadly virus.
This has informed the decision of global groups such as United European Football Association (UEFA), COPA America to postpone their sports events by a year. Many international and local artistes have also postponed their concerts indefinitely.
However, Oyo state Governor, Seyi Makinde held a PDP rally in Ibadan on Wednesday, March 18, 2020 with multitudes in attendance.
APC National Publicity Secretary, Lanre Issa Onilu minced no words as he berated the governor and the party for holding a mass gathering rally amid the pandemic.
“Nigeria just cancelled the scheduled National Sports Festival, NYSC camps have closed down nationwide, a travel ban on government officials is in place, restricted entry into the country for travellers from 13 countries is in effect, improved emergency medical response across the country is in place among other social distancing steps being taken to protect our country.
“Five new cases were announced yesterday and efforts are underway to track persons who have had contact with these confirmed cases. The PDP’s thoughtless action is shockingly at variance with the current world effort to contain this pandemic.
“Events in most countries of the world and instructions being given by the government do not support this criminal activity. Obviously, the PDP is incapable of applying itself to rules and common sense.
“Even as the APC-led government is working to place a new national order for good governance and patriotic citizenship, PDP, living up to its legendary infamy, has continued in its malicious ways.
“How could any group choose this period to pull a crowd together? What is at stake at this moment that requires this level of risk taking? Why do the leaders of PDP not realise this action is capable of putting the country in jeopardy?
“For how long will this country put up with a badly behaved and clueless opposition party with irredeemable tendency for taking actions that violate all known moral principles? This is a new low, even for the PDP’s abysmal standards.
“We call on well-meaning Nigerians to plead with PDP leaders to be responsible for once. This is a time for them to apply some intelligence to their actions.”
Top Stories