Uzodinma gave the order in a state broadcast in Owerri, insisting the move was in line with his commitment to protect the loves of the people of the state. 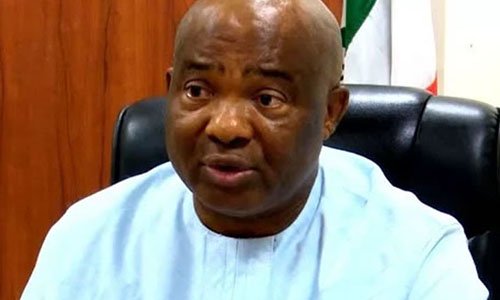 The Nation reports that the Imo Governor, Hope Uzodinma has ordered complete lockdown of the state as part of measures to prevent the dreaded Coronavirus (COVID-19) disease from entering the state.

Uzodinma gave the order in a state broadcast in Owerri.

He said the move was in line with his commitment to protect the loves of the people of the state.

The governor ordered that all markets be closed indefinitely and also prohibited all forms of marriage ceremonies.

He also announced the ban on burial and funeral ceremonies and declared that all forms of religious worships in churches and mosques, including crusades and open evangelism were prohibited.

Uzodimma further directed that road blocks be mounted at all land borders into the state to ensure those coming in would be screened and given a clean bill of health by officials attached to the check points, before allowed entry.

He also directed all civil and public servants in the state, except those on approved essential duties, to stop work immediately.

He said a combined team of military, police and other security agencies would be deployed to the streets to ensure strict compliance with the directives.

The governor, however, noted that though the new measures might cause some inconveniences or hardship to the people, they were inevitable to assure success in the fight against COVID-19.

The governor assured the people that the state was ready for any emergency as according to him, “a team of specialist doctors are now on ground and well equipped to handle any emergency just in case the virus finds its way into the state.”

Further measures announced by the governor to contain the virus included, training of health educators to go to rural communities to educate them as well as the distribution of hand sanitisers to all the communities in the state.

Uzodimma stated that these measures would be reviewed on weekly basis and if it became necessary to relax them or take more measures, the government would act accordingly.

The governor who assured that his administration would be at its best toward surveillance, prevention and control, called for vigilance and strict adherence to safety norms.

“I wish to reiterate my earlier advise that the best safety measures against the disease are social distancing, regular washing of hands with soap, sanitising our hands regularly as well as periodic check of body temperature to be sure that it is not above 38 degrees Celsius.” he said.

While acknowledging that the number of those infected by the disease in the country is on the increase, Uzodimma said it had become expedient for government to take further measures to ensure that Imo was safe from the Coronavirus pandemic.