The mother of three explained that her husband has also destroyed the windows and doors in their house. 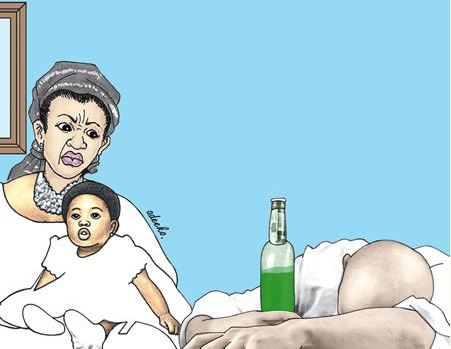 A housewife, Mary Okunade, has appealed to an Ado-Ekiti Customary Court in Ekiti State, for the dissolution of her 25-year-old marriage to her husband, Tokunbo Okunade, on grounds that he was a drunk and also a wife beater.

According to the News Agency of Nigeria (NAN), the mother of three told the court that her husband has destroyed the windows and doors in their house.

“I have not known peace in the 25 years of our marriage. My husband is a drunkard and a night crawler.

“He defecates in my pots whenever he comes home late after drinking alcohol. He also sold four bundles of iron sheets out of the six bundles I bought,” she stated

She alleged that her husband has refused to support her or provide for their three children, aged 24, 19 and 14 years old.

Delivering her judgment, the court president, Mrs Olayinka Akomolede, held that since Tokunbo repeatedly shunned notices to appear in court, their marriage has been dissolved.

Akomolede consequently ordered that the 14-year-old girl should remain with the petitioner, while the other two could decide where to stay.

She also ordered Tokunbo to pay N6,000 monthly feeding allowance to the petitioner.

“He should also return the four bundles of iron sheet he took from the petitioner. The respondent is granted access to his daughter,” she ordered.