A female robber and her gang members have been given the beating of their lives after they were caught. 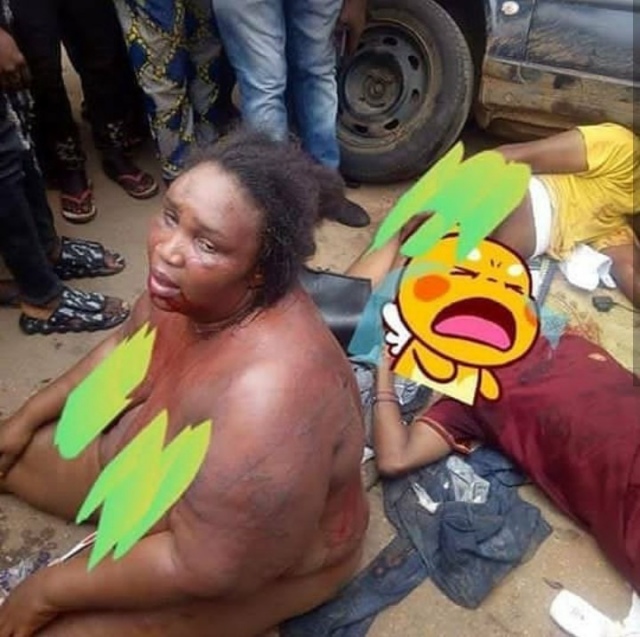 The one chance robbers after they were caught
A female one-chance robber and her three gang members (males) have been caught allegedly robbing along Benin-Auchi road.
The gang members were beaten and disgraced.
The gang of robbers, also known as "one chance", operate a taxi which they use in robbing unsuspecting passengers. They were caught after they robbed a woman and tried throwing her out of their taxi.
A victim of the gang, Mrs Mariam Ufua, narrated her ordeal in the hands of the robbers. She said she was disposed of a sum of 30,000 Naira after she boarded a Taxi operated by the gang.
She said she boarded the taxi to New Benin, unaware that the passengers were members of a gang.
In the course of the journey, she said they asked her to wind down the window. She obliged, not knowing it was a ploy.
When she tried, the glass wouldn't budge. As she turned to tell them the glass wasn't working, she noticed they had dragged her bag.
She began dragging with them. When she finally got hold of her bag, she noticed the zip was torn and her 30,000 Naira was gone.
After they were done stealing from her, they tried pushing her out of the moving car but she struggled and screamed for help. She sustained injuries on her leg during the tussle.
A taxi driver who heard her screaming came to her rescue.
The taxi driver said he chased the suspects after he heard Mrs Ufua's screams. In an attempt to escape, the suspects lost control of their vehicle and crashed into a gutter.
They were then apprehended and the female member of the gang was stripped.
Security operatives intervened before the gang members could be lynched.
Top Stories