Seven men have been arrested for allegedly impersonating soldiers and perpetuating crimes in Lagos state. 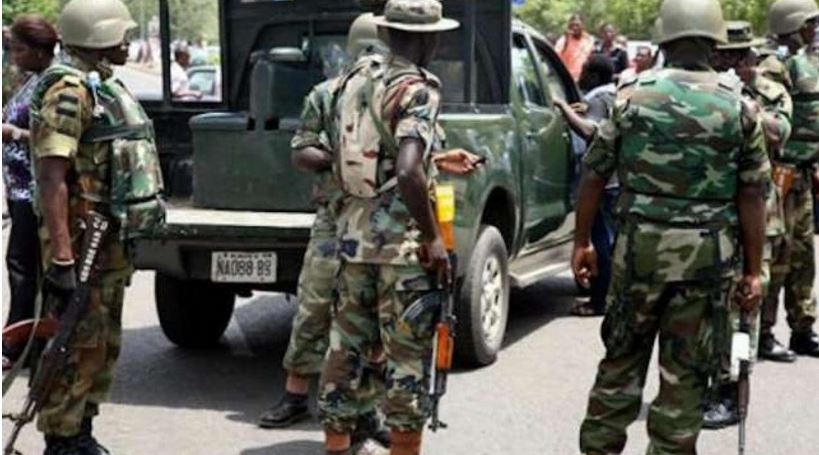 The Operatives of 81 Division, Nigerian Army, on Tuesday, arrested seven persons, who allegedly impersonated military officers and perpetrated criminal activities during the lockdown in Lagos State.

Irefin said that the suspects were arrested when the division embarked on “Operation Checkmate”, to check the activities of erring personnel, imposters and enforce discipline during the lockdown.

“For the past two weeks, precisely in support of the lockdown order by the Federal Government of Nigeria, 81 Division embarked on Operation Checkmate at various locations within Lagos State.

“Operation Checkmate is a routine activity in 81 Division Area of Responsibility (AOR) to checkmate erring personnel, impostors and enforce discipline,” he said.

One of the suspects, Johnson, who spoke on how he was arrested, confessed he bought the military uniform for N20,000.

According to him, some of the suspects caught with military accoutrements, used their vehicles and motorcycles for commercial purposes, defying the state government’s lockdown order.

“During one of the operations carried out at Victoria Island, Obalende and Ojo environs, some criminals were arrested impersonating as military personnel.

“Some were using the military accoutrements for illegal duties, painting the military in bad image. We will continue this operation until we restore normalcy to the society,” Irefin said.

He warned that the army would henceforth arrest anyone who uses military stickers or any military accoutrement to perpetrate any illegal act,” he said.

“The operation is also not necessarily for miscreants but for our personnel too, who are misbehaving and carrying passengers. Nobody is permitted to use military stickers on their cars at any point in time.

“We the military don’t use the stickers again, so anyone using military sticker, accoutrements, will be arrested and where necessary handed over to the police,” he said.

He further enjoined the public to be wary of such impostors.

“Consequently, members of the Nigerian public are enjoined to be aware of such imposters who hide in military outfit to commit crimes.

“We also wish to inform the general public that most of those who posed in military outfits and carrying passengers on motorcycles are not soldiers or members of the Armed Forces.

“The public are hereby advised to report any suspected person in military outlook,” he said.