Nigerian Man Who Contracted Coronavirus In Ireland Reveals How He Survived


Opabola, who spoke on Channels Television’s Sunrise Daily, said it all started with a cough. 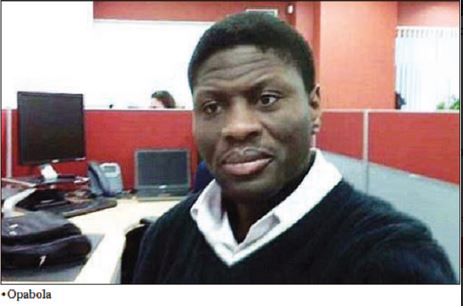 A Nigerian COVID-19 survivor, John Opabola who lives in Longford in the Republic of Ireland, has explained what he went through after contracting the virus.

Opabola, who spoke on Channels Television’s Sunrise Daily, said it started with a cough.

According to him, he contracted the virus at work when an infected colleague came into his department to pick up a laptop.

“When I started having dry cough, I called a General Practitioner who booked me for a COVID-19 test. After a few days I began to vomit and experience diarrhea; at this point, I couldn’t stand by myself and breathing became very difficult for me.”

Asked if the symptoms were similar to something he had experienced in the past that could have confused him, he answered in the negative.

“It started with a dry cough and you know when you experience dry cough here in Ireland around this time, we assume that it is just a flu so I quickly began to exercise and practise the normal procedure to cure myself from flu but it degenerated so quickly to a fever. I was having a very strong fever as well as aches and pains which were very painful. The fever was between 38.9 and 39 degrees.

“The policy in Ireland says if you find it difficult to breathe or your respiratory system is affected, you need to call the hospital straight away; however, in my own case, I started vomiting blood and immediately I vomited blood around 4am one Saturday morning, my wife called the ambulance system and they came, checked and even gave me a choice of either going for treatment or not,” he said.

Opaloba said he was grateful his condition did not affect his lungs or cause other severe sicknesses.

“I noticed the cough started around March 25 which was a Friday and by the weekend I had to call off work; I told them that I can’t come in anymore. I had started having severe tiredness and general weakness of the body. By Wednesday of the following week, I had started vomiting and had diarrhea so by 7 to 8 days it was full blown in my system and on Saturday by 5am, I called the ambulance because I vomited blood and when I got to the hospital, the second vomit I had was a brown coffee colour.

“The doctors told me then that that was extremely dangerous for the system so at the hospital I was put on IV and was given antibiotics. I remember them giving ma an IV Paracetamol and at that point I passed out and came back later in the day.”