Nigerians have attacked the governor of Kano state accusing him of trying to convert a Christian girl to Islam. 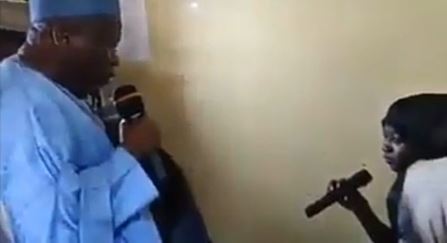 Governor Abdullahi Ganduje accused of trying to force a girl to convert to Islam
The Kano State Governor, Umar Ganduje has been criticized and accused of allegedly ‘trying to covert a Christian girl to Islam’.
This comes after a video of his interaction with a Christian girl surfaced online.
The Governor, who spoke in Hausa language, was captured questioning a young girl who ‘reportedly had decided to change her faith.’
The Governor in the two minute clip told the young girl that a ‘Malami would put her through on what Islam is all about.’
Ganduje also asked her to pick a Muslim name
However, the video has generated reactions from Nigerians who accused Ganduje of forcefully converting the young girl to Islam.
Some Nigerians are of the opinion that the young girl was under duress to covert to Islam.
Watch video below:
Top Stories