COVID-19 Lockdown: We Are Hungry - Hundreds Of Ogun Indigenes Protest In Abeokuta (Video)


Residents of Ogun state have shunned the lockdown order to protest as they complain of hunger. 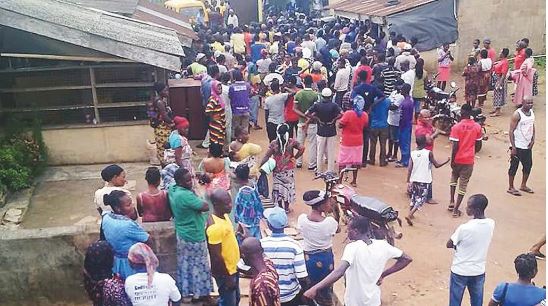 Ogun residents protesting lockdown
Indigenes of Ogun State in their hundreds on Wednesday, took to the street to protest the COVID-19 lockdown in the state.
Traders, artisans, men, women and youths all came out to complain about the adverse effect of the lockdown.
It was gathered that the locals had earlier marched to the Government House in Isale Igbein area of Abeokuta, thinking Governor Dapo Abiodun was there to attend to them.
But they were reportedly dispersed by policemen from Ibara Divisional Police Headquarters, as they were made to realise the Governor was not there.
According to DAILY POST, Governor Abiodun has not moved into the official residence since May 29, 2019.
The protesters, it was learnt, later regrouped and moved to the palace of the Alake and Paramount Ruler of Egbaland, Oba Adedotun Aremu Gbadebo, saying they were hungry and tired of the lockdown.
In a video that surfaced on social media, some of the protesters were seen rolling on the floor to demonstrate to the Alake that their means of livelihood had been truncated.
Speaking to them, the Alake urged the people to be calm.
The monarch, who our correspondent learnt has been distributing food items to the poor in Abeokuta, assured the people that he would get more relief packages from donors to cushion the effects of the lockdown.
He said they would be informed through the radio when the food items are ready, adding that he would communicate their message to the government.
Watch video below: