A young boy has been abandoned by his mother in Benin after she fled from the COVID19 taskforce for flouting the lockdown order. 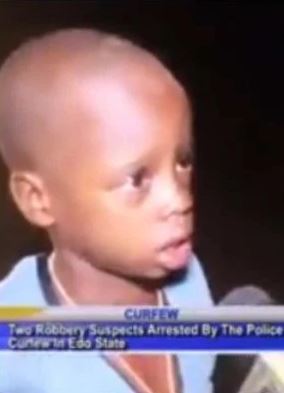 A young lad was abandoned by his mother in Benin, Edo state, as she fled from security operatives enforcing the lockdown order.

The young boy who was abandoned by his mom has been identified as Destiny.

When interviewed by an ITV correspondent, Destiny disclosed that the “his mother had gone home”. He also revealed that they live around “Total” area of the city.

Watch the video of him speaking below;

Boy abandoned by his mother who was fleeing from security operatives enforcing lockdown order in Benin. pic.twitter.com/WGyOMovjfx