Who Lied To Buhari? - Actress, Hilda Dokubo Laments Ease Of Lockdown Despite Rise In Cases (Video)


The veteran actress made her point known in a video posted on her Instagram page on Saturday. 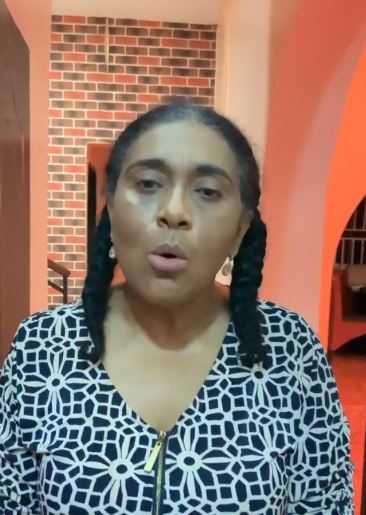 Nollywood veteran actress, Hilda Dokubo, has lamented the decision of the Federal Government to ease the lockdown in Lagos, Ogun and Abuja despite the rise in confirmed cases of COVID-19 in the country.

The actress made this known in a video posted on her Instagram page on Saturday, stating that the President must have taken the decision to ease the lockdown due to false reports about the current situation of the Coronavirus pandemic in the country.

In the video, the actress said she was also eager to know the person that lied to the president that the situation had improved, adding that she wondered why the government would want people to resume work and go about their daily lives when they have not even fumigated streets, major roads and other places to make it safe for people.

”Because of the strength of a lie, he has approved an ease, and he has also approved an increase in the number of people to be tested daily to 2500. If they could not accomplish 1, 500 daily, then how are they able to achieve 2, 500 a day?

”The nurses and doctors and all health workers are working extremely hard, breaking themselves into pieces just to save lives and a few people are sitting in the comfort of an air-conditioned room reaching an agreement that empowers only their pockets.

‘Why make mess of people’s efforts? Why?

”Sometimes when I think of what people that sit in committees come up with, I wonder what runs in their veins. Blood or water? Because they react like people who don’t feel the pain of others.

”You have moved responsibility from yourself and hung it on the neck of the common masses, the same people that you are supposed to be protecting.

”During the lockdown, a lot of the poor were on the streets..why? Because your palliatives did not get to them. They were out there struggling to see how they can feed off the food that you hoard at them.

”So the palliatives didn’t get to them, no one is empowered to carry out research so research is not going on and now, you are throwing people back into the streets, the streets that you haven’t even fumigated, you haven’t even cleaned up but you have told us that this virus is airborne and can stay airborne for 8 hours.

‘I don’t understand. Do you even assume that everyone is stupid?

”Let us take for instance Lagos state. With no traffic during the lockdown, they could not trace people who had contact with those who had tested positive to the virus.

”So imagine now with traffic, how they will trace anyone and if someone needs help, how will the NCDC get to the person?

”Do we want to end up like Ghana who lifted their lockdown prematurely and ended up with all the casualties that they have. Can we handle that casualty?

”Someone is lying to the President and that person needs to stop.”

They have relaxed the lockdown. Your safety and life is now in your hands. Do not relax! Corona virus is not relaxing. Observe all the safety protocols. Any attempt to believe their lies.... #wearyourfacemask #watchyourself #socialdistancing #coronavirus #Godsavenigeria