'Are You From Niger Republic?' - Reno Questions Buhari's Birthplace For Approving $1.9 billion Railway Contract to Niger

Nigerian Pastor Allegedly Drags 16-Year-old Into His Room, R*pes Her In Benue


Two robbers have been apprehended by the police after a failed robbery attemot in Ogun state. 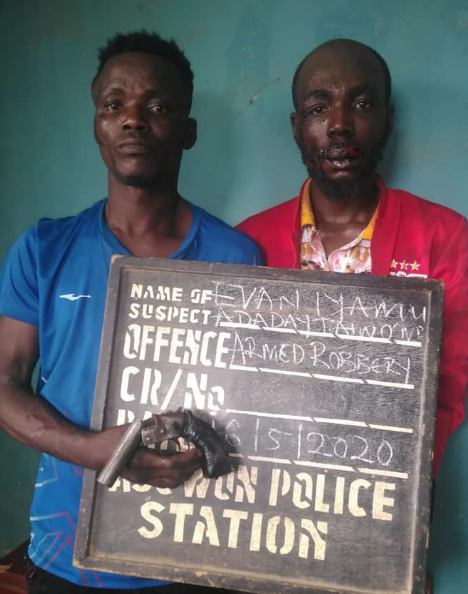 Men of the Ogun state police command have arrested two members of a robbery syndicate, Evans Iyam and Adedayo Taiwo, pictured above, for carrying out an attack in the Ajuwon community in Ifo Local Government Area of the state.

A statement released by the spokesperson of the state police command, Abimbola Oyeyemi, said the suspects were arrested while on an operation on Damsalam Street in Ajuwon on Saturday May 16.

“The suspects were arrested following a distress call received by the police at the Ajuwon Division that a three-man robbery gang had stormed the street and shot indiscriminately, thereby throwing the whole street into panic".

Oyeyemi said the police were alerted and  DPO, Ajuwon Division, SP Andrew Akinseye, quickly mobilized his anti-robbery team and moved to the scene. He said the robbery suspects took to their heels on sighting the police officers. A hot chase led to the arrest of two of them while the third member of the syndicate escaped with their motorcycle.

A locally-made shotgun was recovered from the suspects. The suspects confessed to coming to the area for the robbery operation from Ishasi in Lagos State.

The police spokesperson said the suspects will be charged to court when an investigation into the incident has been concluded.

'Are You From Niger Republic?' - Reno Questions Buhari's Birthplace For Approving $1.9 billion Railway Contract to Niger