No Pastor Can Predict The End Of Coronavirus - Bishop Mike Bamidele


A man of God, Bishop Mike Bamidele has tackled pastors predicting the end of coronavirus. 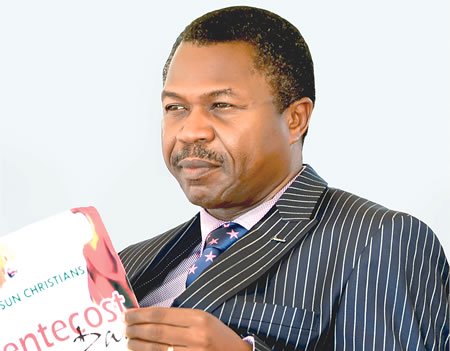 Biship Mike Bamidele
Bishop Mike Bamidele, the General Overseer of Victory Chapel International Church, Osogbo, has thrown a shade at some pastors who failed after predicting the end of coronavirus.
According to him, no pastor could predict the end of the Coronavirus pandemic in the country.
TheNation reported that Bamidele spoke at a news conference to announce the 2020 Pentecost Day Celebration.
According to the Bishop, pastors who had earlier predicted the end to the virus but which did not come to pass needs to check the spirit that they are operating with.
Bamidele said what could put an end to the virus was for people to seek God’s intervention and also to exercise faith in God.
“There is no specific date the virus will end but the day any man is healed by exercising faith in God, that is the day the virus will end.
“I do not know the kind of spirit those who predicted the end of the virus are operating with but for me, an end has come to the virus the day Jesus died on the cross,” the bishop said.
Bamidele, who noted that the virus was evil from hell, warned that nobody should blame God for it.
The cleric said the churches would continue to support the government with prayers for an end to the virus, adding that government should be commended for their efforts so far in containing the spread of the disease.
Speaking on the Pentecost Day, the bishop, who is also the convener of the programme, said the programme would be held online and it would be aired live in all the radio stations in the state on June 1.
He said there would be a prayer for those who were affected with the virus and all other diseases, adding that people would also be allowed to call in during the programme.
The bishop said the programme would hold between 10 a.m. and 3 p.m. with pastors from other states in attendance.
The cleric added that the people would be empowered supernaturally during the programme for breakthroughs in all areas of their lives.
Bamidele, however, said the Pentecost Day should be declared as a public holiday by Osun State Government and the United Nations.
He noted that if the state government could declare a public holiday for Muslims to celebrate Hijrah and for traditional worshippers, the same should be declared for Christians to celebrate Pentecost.
Bamidele said since the Pentecost Day was the 50 days after Jesus resurrection, it should be declared as a public holiday for the sake of fairness and justice.
Top Stories