IPOB leader, Nnamdi Kanu and Asari Dokubo have come under severe criticism from a Biafra group. 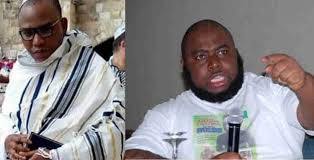 Nnamdi Kanu and Asari Dokubo
Biafra Nations Youth League, BNYL, has attacked indigenous people of Biafra, IPOB leader, Nnamdi Kanu and former militant leader, Asari Dokubo.
It all started after Asari released a recent video asking Nnamdi Kanu and his group, the IPOB, to seize oil wells in the South East and stop “idiotic ranting.”
BNYL said Kanu and Asari now have nothing more to offer than making news headlines every day.
Ebuta Takon Akor, Deputy National Leader of BNYL and Director of operations, Biafra Broadcasting Service, BBS, said this in a statement to DAILY POST on Monday.
The group said that most Biafra agitators have adopted the attitudes of market women, having lost focus on the struggle.
He warned especially the IPOB leader to desist from insulting people and using foul languages on fellow Biafra activists adding that his arrogant words and insults against some ignorant people from the South-South and unnecessary blackmail won’t win the support of the people of the region especially the ignorant ones.
“We know they have retired from the struggle, but using their platforms to make news headlines,” the BNYL said.
“I would advise that they go to the market and quarrel. I know the character of Nnamdi Kanu, his attitude has been to insult non-IPOB leaders and those he feel they’re ignorant in the South-south, but he failed to understand that arrogance and blackmail won’t win the support of those so called ignorant people.”
Akor wondered why men of over 50 years old have failed to lead by example, reminding them of the situation at stake especially the rampaging Fulani herdsmen attacks in the region and their inability to proffer solution. He advised them to drop the struggle if they are tired.
“If they don’t have a solution to Biafra and Fulani killings in our land let them drop and go to the market, that’s where women quarrel.
We can’t be reading trash every day in the paper, it shows no maturity,” the group added.
It warned that tribalism in Biafra struggle was not a good signal, he expressed disappointment that Asari Dokubo, Ankio Briggs and Nnamdi Kanu has been on war of words over tribal issues.
“What if I tell them that without my tribe Ejagham or any Cross River tribe there won’t be Biafra, because we are the people that have a direct border with other foreign countries.
“Apart from the fact that Ejagham is in Cameroon, we share sea border with Equatorial Guinea, Gabon, not even Rivers or Bayelsa, but you will never hear them mention Ejagham or Cross River in their claims, and we don’t make this hail of noise that they’re currently doing.”
Top Stories